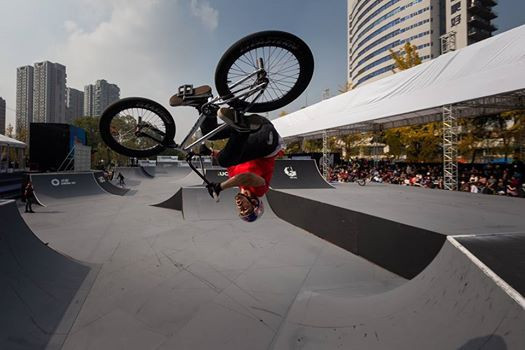 This was the second edition of the UCI event bringing together trials, mountain bike eliminator and BMX freestyle disciplines, all of which were taking place at Xinhua Park in the capital of Sichuan Province in central-west China.

There was a clean sweep of the medals in the women's event as Benegas followed a solid first run with an inspired effort to finish in front of last year's bronze medallist Angie Marino.

Bronze this year went to last year's winner Hannah Roberts, who had started as favourite having won a second consecutive World Cup title.

📷 Take a look back at the action from the Elite Women’s BMX Freestyle Final with our selection of photos 🔗 https://t.co/An3DLtZaYw#Chengdu2018 pic.twitter.com/wpYR6Thedd

The field gave it their all in their second runs, with five riders breaking the 80-point barrier.

Marino scored 87.80 and Roberts 86.30 to put the pressure on Perris, who responded with a series of bars, flairs, whips and a 360 to total 93 points and fulfill her dream of becoming a UCI world champion.

"I didn't expect to win the semis at all," she said.

"I wasn't happy with my first run today, and I had to do better in the second.

"I was the last to go and it was special to have that sense of expectation.

"It's great to have an all-American podium too."

Dowell did things the other way round in the men's final, producing a superb first run worth 92.20 points that a hugely experienced field could not overtake.

The eventual silver and bronze medallists, Costa Rica's Kenneth Tencio Esquivel who earned 88.90 and Australia's Brandon Loupos - who had qualified second from the semi-finals and totalled 88.72 - were left needing to take risks on their second run.

It was the ideal scenario for Dowell, who rode within himself on his second run, while Esquivel took a tumble and Loupos' chances ended when he put both feet on the ground.

📺Watch some of the best moments from the Men BMX Park final in Chengdu 🇨🇳#Chengdu2018 pic.twitter.com/fKi8hGH061

"It's crazy to come and win here," said Dowell.

"I've been travelling the whole year, spending most of the season in Europe, and it's paid off.

"I was flat out in the first run and it put pressure on my opponents.

"With Perris winning too, the USA are dominating the discipline, which means we can go to Tokyo in two years with hopes high."

France finished on top of the medal table with eight in all, in front Germany on six and Spain on five.

A total of nine countries from three confederations - Europe, the Americas and Oceania - shared the 30 medals awarded.

Twelve years after BMX racing's Olympic debut in Beijing in 2008, BMX freestyle will make its first appearance on the programme at Tokyo 2020.