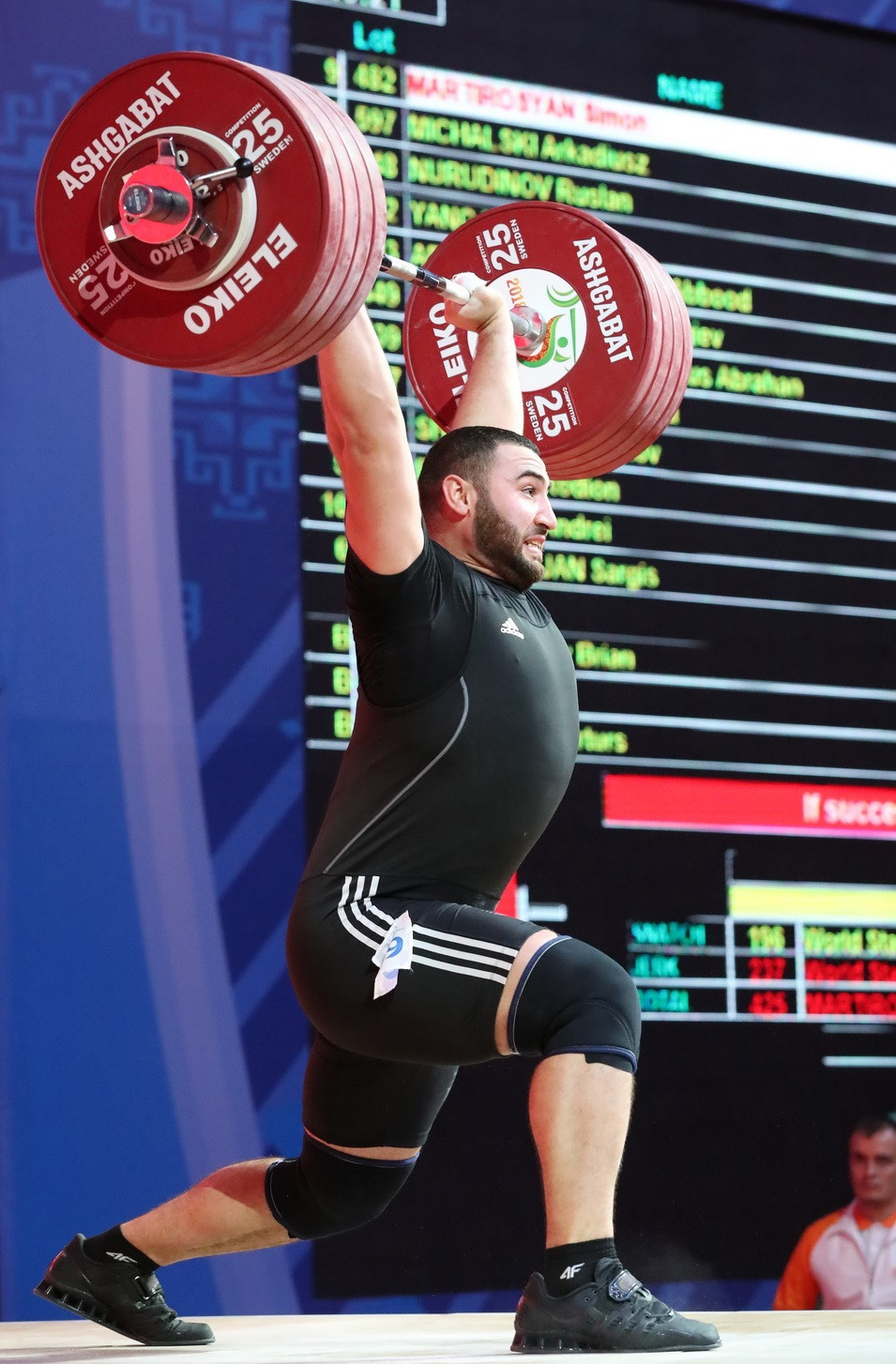 Armenia's Simon Martirosyan claimed his first-ever global title after powering to victory in the men's 109 kilograms category on the penultimate day of the 2018 International Weightlifting Federation (IWF) World Championships here in Turkmenistan's capital.

The first of Martirosyan's two successful clean and jerk lifts, which came at 230kg, also proved to be enough to secure the gold medals in that event and the total.

It earned the Rio 2016 Olympic silver medallist and 2017 European champion a world standard total of 425kg that he would go onto break for a second time.

"I knew I will have a lot of strong competitors," Martirosyan, who opted not to carry out his final lift, said.

"I just did the same thing I always do, I gave my best."

The silver medallist in the total with 419kg was China's Yang Zhe, who won the snatch with 196kg and finished fourth in the clean and jerk with 223kg.

Rounding out the overall podium with 403kg was Poland’s Arkadiusz Michalski after he came 15th in the snatch with 175kg and second in the clean and jerk with 228kg.

Surprisingly, Rio 2016 gold medallist Ruslan Nurudinov of Uzbekistan bombed out of the snatch following one failure at 187kg and two at 189kg.

The 26-year-old bounced back, however, to win the clean and jerk bronze medal with 227kg.

"This is more than I expected tonight," Nurudinov said.

"I was unfortunately sick all week.

"I had a temperature and I feel weak."

The snatch bronze medallist was Russia's Rodion Bochkov with 190kg, earning his country a third podium finish of these World Championships after Artem Okulov claimed double gold in the men’s 89kg category on Tuesday (November 6).

The 21-year-old Ao won the snatch with 117kg to give her a 6kg advantage over third-placed Kim, the 2014 Asian Games champion in the 75kg category.

Kim managed to overcome Ao in the clean and jerk, registering 152kg to her nearest rivals 151kg, but it was not enough to ensure victory in the total.

Ao finished on 268kg overall, while Kim had to settle for 263kg.

The Dominican Republic’s Crismery Dominga Santana Peguero won the bronze medal in the total with 254kg having finished second in the snatch with 116kg and fifth in the clean and jerk with 138kg.

The fourth medallist in the category was Chile’s Maria Fernanda Valdes Paris, who came third in the clean and jerk with 140kg.

Another notable performance came from 40-year-old Ecuadorian Oliba Seledina Nieve Arroyo as she defied her age to record an impressive seventh-place finish in the total with 241kg.

Action in Ashgabat is due to conclude tomorrow.

Medals will be awarded in the women's over-87kg and men's over-109kg categories.

Competition will be followed by the Closing Ceremony.