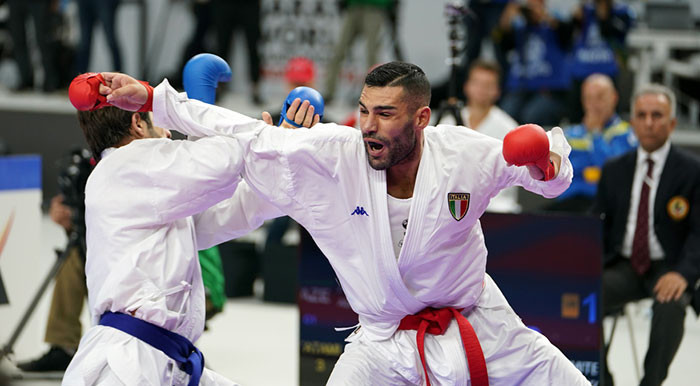 Defeat for Aghayev came on a miserable day for the defending champions in action as all five returning gold medallists exited their respective division following a string of surprise results.

Egypt’s Giana Lotfy, England’s Jordan Thomas, Amir Mehdizadeh of Iran and Alexandra Recchia of France were the other casualties who failed to make it to the finals on Saturday (November 10).

All eyes were on Aghayev, seeking to make history by becoming the first karateka to secure six world titles.

But Busa, the 2017 European champion, largely controlled the contest as he recorded a 2-1 win over the 33-year-old.

A yuko score put the Italian, who arrived at the event here having claimed a gold medal at the recent Karate-1 Premier League final in Tokyo, in charge of the contest.

Both karatekas then scored simultaneously, handing Busa a 2-1 advantage, before he thwarted Aghayev’s desperate late attacks to book his place in the final.

Bahman Asgari Ghoncheh stands between Busa and the Italian’s second world title after the Iranian overcame Russia's Beslan Mizov 2-0 in his semi-final.

Austrian Alisa Buchinger, the reigning under-68 world champion, who had dropped down a weight category for this year’s Championships, also failed to reach the latter rounds as the favourites in the category struggled.

Preković built on her success over Lotfy with a thrilling semi-final win over Turkey’s Merve Çoban in one of the most dramatic contests of the day.

She trailed 3-1 going into the last 10 seconds but scored a perfectly-timed ippon to clinch a 4-3 triumph.

Her opponent in the final is scheduled to be China’s Xiaoyan Yin, who beat Italy's Laura Pasqua in their last four encounter.

Thomas' title defence at under-67kg proved to be a weak one as he lost in the first round, although he can be considered unlucky for drawing 2017 European gold medallist Burak Uygur of Turkey.

France’s Steven Dacosta was among the standout performers in the category, sealing his place in the gold medal bout with a dominant 2-0 win over Iran’s Haoon Derafshipour.

Dacosta, bronze medallist at the 2016 World Championships in Linz, is scheduled to face Brazilian Vinicius Figueira, a 3-1 winner against Chile’s Camilo Velozo in their semi-final.

In the absence of Emilie Thouy of France, a new champion is guaranteed to be crowned in the women's under-55kg division.

Germany's Jana Bitsch and Poland's Dorota Banaszczyk will battle for the honour at the weekend after they came through their semi-finals in contrasting style.

Bitsch claimed a commanding 4-0 victory over Russian Valeriia Alekhina, while Banaszczyk beat Sara Yamada of Japan by decision after the contest finished all-square at 0-0 following the end of regulation time.

Abdessalam Ameknassi accounted for defending under-60kg champion Mehdizadeh but the Moroccan's charge to the gold medal bout was halted by Italy's Angelo Crescenzo, who dominated their semi-final clash on his way to a convincing 3-0 triumph.

Crescenzo will be wary of the threat posed by his opponent in the final, Naoto Sago, after the Japanese rising star superbly dispatched Kazakhstan's Darkhan Assadilov 10-0 in the last four.

Recchia was the last remaining hope for the class of 2016 but was unable to buck the trend at under-50kg, suffering a shock defeat to Kazakhstan's Moldir Zhangbyrbay.

The final is set to be between current European champion and 2014 World Championships gold medallist Serap Özçelik of Turkey and Japan's Miyo Miyahara.

Özçelik fell behind early on before recovering to beat Russian Tatiana Rybalchenko 3-1.

Miyahara, who has emerged as a serious contender in the division following her success on this year's Karate-1 Premier League circuit, earned a comfortable 6-0 victory against Austrian Bettina Plank.

The Championships are due continue tomorrow with team kata and kumite qualification.