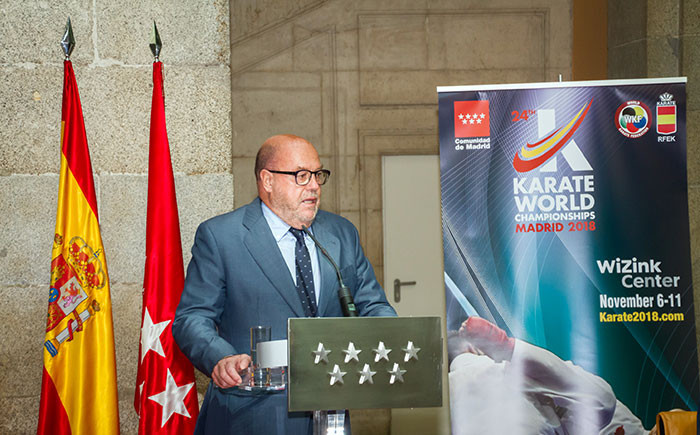 Action at the upcoming World Championships in Madrid will provide the "perfect prelude" to the sport's Olympic debut at Tokyo 2020, World Karate Federation (WKF) President Antonio Espinós has claimed.

Espinós was among the attendees at an event held in the Spanish capital to officially launch the Championships, which begin on November 6.

The WKF President was joined by President of the Madrid region Ángel Garrido and several high-profile Spanish karatekas, including kata stars Sandra Sanchez and Damian Quintero, at the event in Madrid.

"We would not be here today if it wasn't for the support of the government of the Madrid region," said Espinós.

"The karate world will always be thankful to the Madrid region for giving us the opportunity to host this event in Madrid.

"It means so much to me on the personal level that this event will take place in Spain, in my country.

"It is the fourth time that the Karate World Championships are being held in Spain, but this time it will be extremely special."

Karate was one of five sports added to the Tokyo 2020 Olympic programme, along with baseball softball, skateboarding, sport climbing and surfing.

"Never before in the history of karate has an event like this been so important," Espinós added.

"This edition of the World Championships is the last one before the debut of our sport in the Olympic Games Tokyo 2020 and it is the tournament providing a higher point count for the Olympic standings.

"So, these World Championships will be a perfect prelude of the karate competition at the Olympic Games."

The WKF announced last week that this year's World Championships had broken the participation record for the event.

More than 1,400 athletes from 139 countries have entered the competition, which runs through to November 11.

"Karate will be making its debut as an Olympic sport in Tokyo 2020 and there is no better stepping stone that these World Championships in Madrid," said Garrido.

"We hope that this event will be one of the best in history.

"Madrid is with all of you and Madrid will always be supporting each one of you."