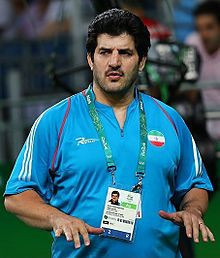 Iranian Wrestling Federation (IWF) President Rasoul Khadem has resigned from his post for the second time this year.

Khadem opted to stand down from his position following an under-par showing from the country’s wrestlers at the World Wrestling Championships in Budapest.

The Championships took place at the László Papp Sports Arena from October 20 to 28.

Iran came away from the Championships with four bronze medals, with none of their wrestlers having progressed through to finals.

Mehdi Aliyari then secured a bronze in the men’s 97 kilogram Greco-Roman event.

the 46-year-old Khadem has opted to resign following the Championships.

According to the Tehran Times, Khadem claimed investment was required of Iran to keep pace with other nations, but stated that the country would soon return to its "glory days".

Khadem had resigned from the IWF Presidency in February this year.

He resigned in protest at wrestlers being punished due to the country's ban on athletes competing against Israel.

It followed wrestler Alireza Karimi being suspended for six months and his coach Hamidreza Jamshidi for two years by United World Wrestling.

The bans followed claims he had lost the quarter final of his under-86 kilograms freestyle contest at the 2017 Under-23 World Championships in Bydgoszcz on purpose to avoid Israel's Uri Kalashnikov in the next round.

Khadem had allegedly claimed that if the Government insist on continuing the policy, the blame should not fall upon coaching staff and athletes.

He returned to his role as IWF President in April.

Khadeem enjoyed enormous success during his career as an athlete, as he secured men’s 90kg Olympic gold medal at Atlanta 1996, following a bronze at Barcelona 1992.