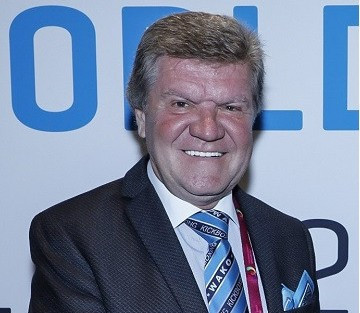 The World Association of Kickboxing Organizations (WAKO) have paid tribute to their President Borislav Pelevic following his sudden death at the age of 61.

The governing body confirmed in a letter to members that Pelevic had died at his home in Belgrade on October 25.

Pelevic had been WAKO President since 2015, having previously served as a board member at the organisation.

He was also the founder and President of the Serbian Kickboxing Federation.

"The President, as most of us know, had triple bypass surgery in April and was recovering well, but on significant medication and his health was growing," said Roy Baker, WAKO vice-president, in the letter.

"Yet less than three weeks after that he was at the SportAccord Convention in Bangkok, his commitment to the ongoing development in our sport was inspirational.

"He always put the sport first.

"I, we on the Board and you, our members, have lost a very close and dear friend, somebody that had a passion and drive for life.

"He will be missed."

GAISF is saddened to hear of the death of Professor Borislav Pelevic. As President of WAKO since 2015, Prof. Pelevic was integral to growing the sport of #kickboxing around the world. Our thoughts are with his family and close friends. pic.twitter.com/X1HFkU6Qs7

A funeral service is set to take place in Belgrade on Monday (October 29).

As well as serving as WAKO President, Pelevic was a professor of sport administration at Belgrade University.

He was also a former President of the Nationalist Party of Serbian Unity, while he was a candidate in the 2004 Presidential election in the country.

Pelevic was twice elected to the Serbian Parliament and latterly became a member of the Serbian Progressive Party, who now have a majority in the Serbian National Assembly.

In addition to WAKO, a tribute was paid by the Global Association of International Sports Federations (GAISF).

"GAISF is saddened to hear of the death of Professor Borislav Pelevic," GAISF said.

"As President of WAKO since 2015, Prof. Pelevic was integral to growing the sport of kickboxing around the world.

"Our thoughts are with his family and close friends."