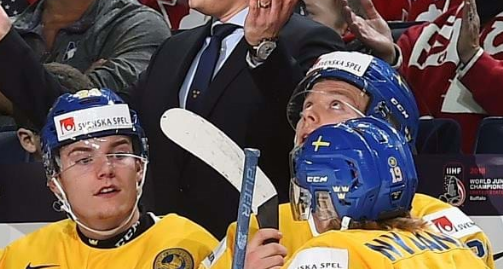 The Court of Arbitration for Sport (CAS) has overturned bans on three Swedish ice hockey coaches who were sanctioned for not wearing their medals.

Under-20 coaches Tomas Monten, Nizze Landen and Henrik Stridh were all handed suspensions by the International Ice Hockey Federation (IIHF) following the 2018 World Junior Championships final in Buffalo in the United States.

Sweden lost the match 3-1 to Canada and, after the victory ceremony, all three coaches removed their silver medals and did not wear them for the remainder of the official celebration.

The IIHF said this was in breach of Article 5.5.8 of their Championship Regulations.

Monten was suspended from the first three games of the 2019 World Junior Championships in Canada, with Landen and Stridh handed two match bans.

CAS, however, have accepted the coaches' appeal and all three will now be able to take part in the entirety of the tournament.

It was ruled that the IIHF regulations do not apply to coaches and only players.

This means bans given to five players who took their medals off will stand, including forward and captain Lias Andersson who will miss the first four games of the 2019 competition.

The IIHF criticised the CAS verdict and has now changed the wording of its rules.

"The IIHF is disappointed in the decision by CAS, as it believes that in the interest of sportsmanship and fair play the participating team's coaches and staff should set an example and follow the same rules that are placed upon the players, especially in this case where wearing the medals is a mark of respect for the game and for the opponent," a statement said.