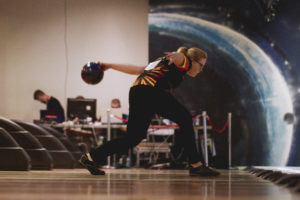 Germany's Laura Beuthner has been cleared of intentionally doping by World Bowling after she was stripped of the gold medal she won at last year's World Games following a positive test for a masking agent.

Beuthner lost the gold medal she claimed in the women's singles event after she tested positive for banned diuretic hydrochlorothiazide at the Games in the Polish city of Wrocław.

The German was provisionally suspended and the case was then passed to World Bowling from the International World Games Association.

Following a hearing, World Bowling confirmed Beuthner bore no significant fault for the anti-doping rule violation and there was "no intention to dope" from the athlete.

She has avoided any further sanction but has been reprimanded by the sport's worldwide governing body.

It came after a "thorough study of the case and the evidence put forward by the athlete", according to World Bowling.

"Ms Beuthner will receive a reprimand and no further period of ineligibility will be imposed for this anti-doping rule violation," World Bowling said in a statement.

The confirmation from World Bowling marks the end of the case against Beuthner.

Kelly Kulick of United States was awarded the gold medal stripped from the German competitor.