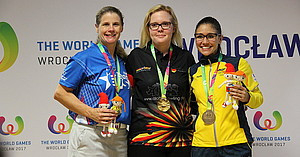 Medal winners in the sports of bowling, rowing and kickboxing has all been stripped of prizes won at last year's World Games in Wrocław after failing drugs tests, it has been confirmed.

These were anabolic steroid stanozolol, breast cancer drugs anastrozole and tamoxifen and tetrahydrocannabinol, the psychoactive component of marijuana.

The 31-year-old, a three-time Pan American champion and a world silver medallist in 2009, has also been banned by the World Association of Kickboxing Organizations until July 26, 2021.

The cases have all been confirmed by the International World Games Association (IWGA), although it is not yet clear if medals will be reallocated.

Kelly Kulick of United States finished second in the bowling event so could be upgraded.

Hamdi Saygılı of Turkey finished in second place in the kickboxing.

There were four adverse analytical findings, one of which was explained by a valid Therapeutic Use Exemption (TUE).

One TUE request was also denied.

It was also explained during an IWGA General Assembly in Bangkok in April that the Polish National Anti-Doping Agency had "major challenges" with entering doping control forms in the Anti-Doping Administration and Management System.