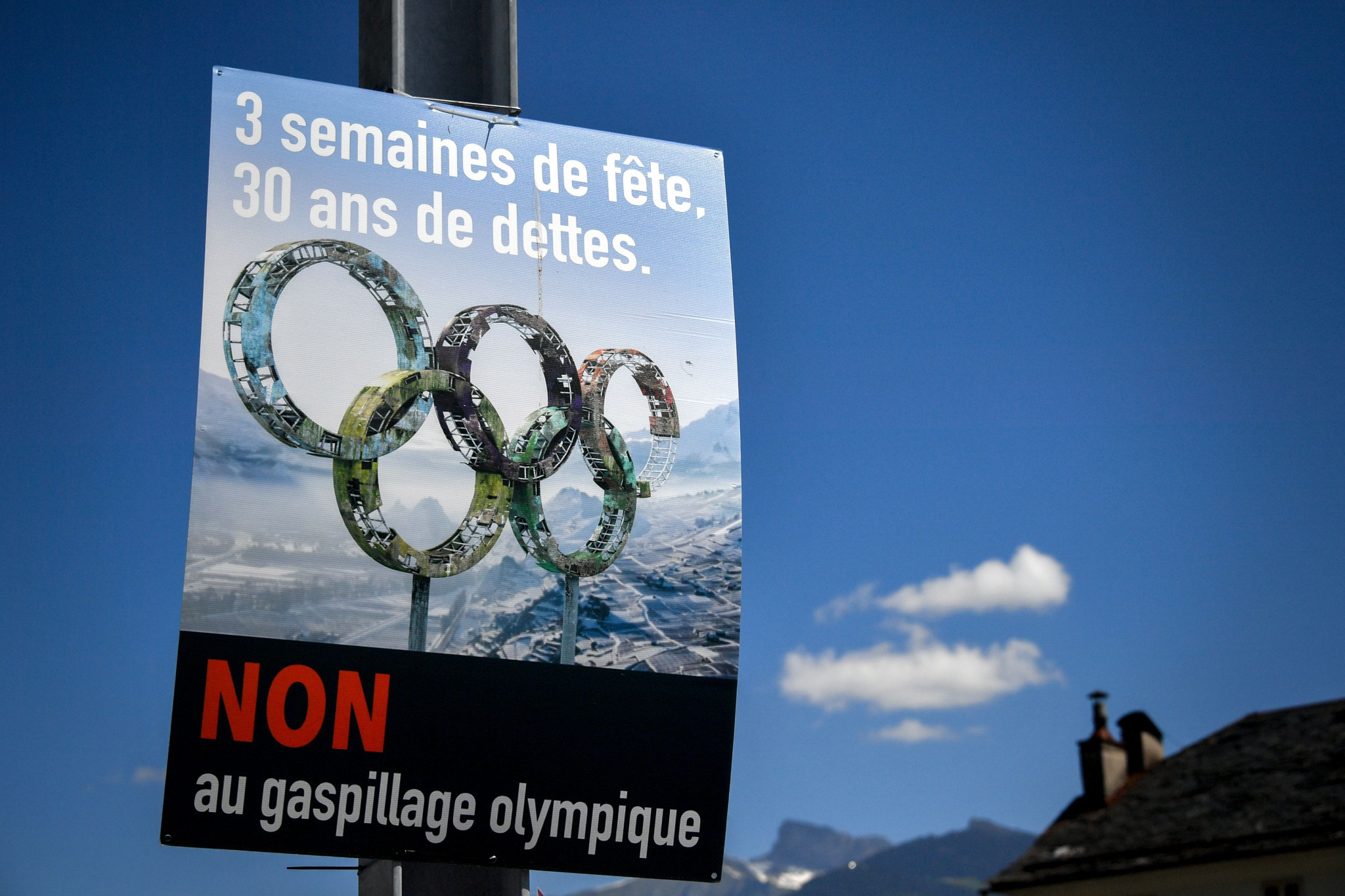 International Olympic Committee (IOC) officials have urged cities to change their negative perception and see the positives of hosting the Winter Olympic and Paralympic Games.

The plea came as politicians in the Canton of Valais warned the region may never bid again after Sion 2026 withdrew from the race following a referendum defeat yesterday.

The city's bid for the 2026 Winter Olympics and Paralympics ocollapsed after voters in a Canton-wide referendum rejected releasing funding of CHF100 million (£76 million/$101 million/€87 million).

Citizens across Valais voted "no" on the proposed funding package, which would have seen some of their tax money used to pay for infrastructure and security.

Residents in the city of Sion itself voted against with a 61 per cent majority.

Valais State Councilor Frédéric Favre was quoted as saying by Le Matin that he did not know if Valais "will experience another Olympic project in the future" after the defeat.

Sion's withdrawal, considered a blow to Olympic bidding and the Movement as a whole, leaves six candidates in the race for the 2026 Winter Olympics and Paralympics, although the status of several of them remains unclear.

The Swiss city became the latest European city to lose a referendum concerning a bid for the Winter Olympics and Paralympics and no bid has been given the green light in a public vote since Oslo in 2013 - an attempt which eventually collapsed anyway.

In a statement following the referendum, the IOC blamed the loss on "outdated information on the cost of the Games".

"You would think Switzerland would be an ideal destination for the Games and it is disappointing," IOC member and World Anti-Doping Agency President Sir Craig Reedie told insidethegames.

"The IOC must now make sure that all of the candidates have all the information they need going forward.

"It is also important to remind cities of how bidding for and hosting the Winter Olympics has the potential for great benefits and how it is an exciting opportunity for the city, the country and for sport in that nation."

Sion's referendum defeat has increased concern over the bidding process, particularly as the IOC have attempted to reduce the cost of bidding and hosting through their "New Norm" reforms.

Patrick Nally, a sports marketing guru credited with laying the commercial foundations of the future of the Olympic Movement in the 1980s, claimed the traditional days of bidding were over and the IOC should instead "select" a city tailored to host the Games.

"I think we should forget bidding processes, you are not going to change people’s perception," Nally told insidethegames.

"The general public do not understand and the negative perceptions outweigh the positives.

"I cannot believe there will ever be a referendum that will go in their favour; the message is just not getting through to cities.

"I think it should be a selection process rather than a bidding process.

"Cities should be elected in a manner which is financially sound, where the legacy plans are sound and take the risky elements of the bid away.

"Bidding must change; the Games should be placed in the right place."

Favre was among those to express his disappointment at the result, where 54 per cent voted against the funding.

"We are obviously disappointed with this result even if the participation rate shows that the subject interested everyone," he said.

In a statement sent to insidethegames, the International Paralympic Committee added: "The IPC is disappointed at the referendum result which has resulted in the Sion 2026 Executive Committee returning its mandate to organise the Olympic and Paralympic Winter Games.

"By voting against the releasing of funds, the citizens have denied Switzerland the opportunity to stage a spectacular sporting event that would have showcased the best of the country to a global audience and an event that would ultimately have transformed attitudes towards impairment and further driven social inclusion.

"At a time when reforms put in place to drive down the costs of staging the Olympic and Paralympic Winter Games are starting to deliver tangible results, residents of  cities interested in staging the Games need only look as far as Pyeongchang 2018’s financial results to see that the Games can deliver a strong surplus."

Innsbruck in Austria became the latest city to suffer such a defeat in October, killing their bid for 2026.

A total of 60 per cent of residents in the Canton of Graubünden also voted against a former rival Swiss 2026 bid.

A referendum for a 2022 bid from Davos, also in Graubünden, was similarly unsuccessful, as was one in Kraków in Poland and Munich in Germany.

That leaves Erzurum in Turkey, currently considered a rank outsider, as well as Graz in Austria, the country where the referendum in Innsbruck has already failed, and Sapporo in Japan, which would prefer to bid for the 2030 edition instead.

The IOC is due to approve official candidates at its Session in Buenos Aires in October before a host is chosen in September 2019.