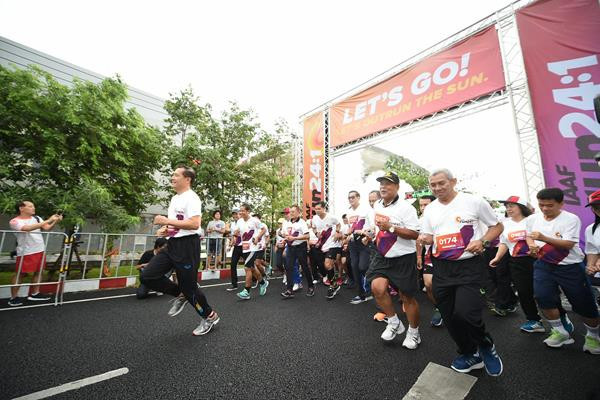 More than 12,000 runners across the globe took part in the inaugural International Association of Athletics Federations (IAAF) Run 24:1 event, it has been claimed.

The event last Wednesday (June 6) saw runners take part in a series of continuous one mile runs, in 24 cities, across 15 time zones.

The campaign to celebrate Global Running Day 2018 aimed to inspire and motivate both individuals and communities to take up the sport.

It was the largest continuous one-mile run to ever take place across multiple cities in 24 hours, it is claimed.

He said: "My sincere thanks go to all our Member Federations who worked with city officials and road running organisations to deliver this ambitious event in record time, and to all the athletes and runners that took part."

The campaign started at the Silverdale Primary School in Auckland in New Zealand and finished in Jericho Beach State Park in Vancouver on the West Coast of Canada.

Coe said it was "a little nerve wracking, watching our 24-hour live feed as a new city and its excited runners took up the baton every hour".

Many world-class athletes took part in the run within their respective cities.

After that Tokyo took up the baton in the Komozawa Olympic Park, where Hirooki Arai, the 50 kilometres champion in the recent IAAF World Race Walking Team Championships, got involved.

The route continued through Asia via Beijing and Bangkok before entering India in Delhi and then Europe through Minsk.

Ramallah became the first city in Palestine to host an international athletics event when runners took part there, despite the event being held in the middle of Ramadan.

Eventually the route entered North America through Toronto before finishing in Vancouver.

Summing up the event, Coe said he hoped it would inspire thousands of new runners to join what he called "the biggest global sport on the planet".