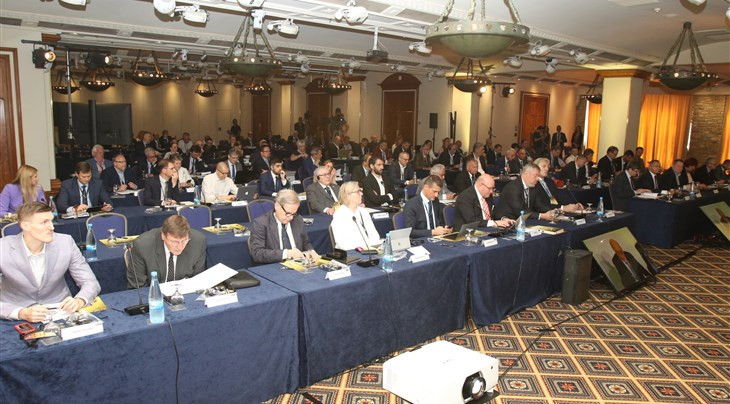 A total of 46 European countries within the International Basketball Federation (FIBA) have signed a declaration condemning the actions of Euroleague Commercial Assets (ECA) as the dispute between the two organisations continues.

The declaration was adopted unanimously at the General Assembly of FIBA Europe in Nicosia.

It included an agreement to discard as "unacceptable" a proposal made by the ECA, who run the EuroLeague, which asked FIBA to ensure their national team competitions take place "on dates that do not compete head to head with any other major sports event".

The protracted row between FIBA and the ECA centres on the the releasing of players by clubs so they can compete for their countries.

The ECA sparked fury last year when they released a calendar for the EuroLeague which did not feature dedicated windows for international games in November 2017 and February 2018.

An alternative proposal for a single six-week window for national team competitions in June and July was dismissed as a "heavy-handed diversionary tactic" by FIBA.

A total of 31 members of the European Parliament have signed a letter to the EU President Jean-Claude-Juncker and the EU Commissioners for Competition and for Culture, Youth and Sport calling for an intervention to ensure players are released to compete for their countries.

They called for an "urgent" solution and accused Euroleague Commercial Assets of taking a "monopolistic approach".

The declaration "welcomes the statements of the Ministers of Sport at the recent Education, Youth, Culture and Sport Council" and urged European governments and the competent bodies of the European Union to "hold ECA accountable for its actions against national teams and the European model of sport".

FIBA claim this has a "negative impact on sport throughout Europe and in particular other team sports".

The ECA's decision to schedule EuroLeague games on the same day and time as the FIBA Basketball World Cup Qualifiers has also been condemned, while EuroLeague clubs have been criticised for their failure to release players to national teams.

The document marks the latest twist in an ongoing saga which shows little sign of being resolved.

The ECA's proposal in March, turned down by the 46 nations, was "aimed at establishing strong and clear principles within a collaborative framework that would enable European basketball stakeholders to work together towards a common objective".

It was presented to FIBA executives by their counterparts from the ECA at a meeting in Geneva.

But it only lasted 50 minutes, with the ECA claiming this was "due to the unwillingness of the FIBA executives to discuss the agreement proposal in any depth".