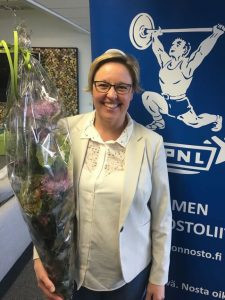 Lundahl first competed at athletics and competed in the shot put at the 1996 Summer Olympics in Atlanta.

Lundahl has moved into sports politics following the end of her professional career.

She currently serves as a member of the International Weightlifting Federation's (IWF) Executive Board.

The Finn was voted onto the Board Lundahl during the IWF Congress in Bangkok in May 2017.

She became the second woman to take such a role.