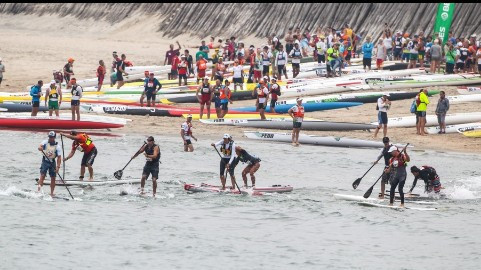 Organisers claim to be hopeful that some of the world's best sprinters and marathon racers will compete at the inaugural International Canoe Federation (ICF)-organised Stand-Up Paddling World Championships in Portugal later this year.

The event is due to be held between August 30 and September 2 at the Esposende and Viana do Castelo in Portugal.

It falls in between the Canoe Sprint and and Canoe Marathon World Championships also taking place in Portugal.

A combination of different events will take place, ranging from 200 metres sprints to 19.5 kilometres long-distance to a 3km technical race.

It comes amid an ongoing dispute between the ICF and the International Surfing Association (ISA) over the discipline of stand-up paddle (SUP) - which involves athletes standing on a board and using a paddle to move across the water.

It was announced late last year that the Court of Arbitration for Sport (CAS) are mediating in an attempt to find a solution after the two parties were unable to reach a consensus together.

Little improvement in relations appears to have been made since.

The ISA claim to represent the grassroots side of the discipline and had initially hoped to incorporate SUP into their application for the Tokyo 2020 Olympics.

The ISA already hosts its own World Championship with the most recent edition held in Vorupør in Denmark in September.

"National canoe federations around the world have been hosting their own SUP events for many years, always with strong support,” said ICF President José Perurena.

“This year we have responded to the wishes of these federations, and the athletes, to host a World Championships, and what better place to do this than Portugal?

“The ICF SUP World Championships will be held during a very exciting ‘Festival of Canoeing’ in Portugal, making it the place to be for any athlete or spectator that enjoys canoeing.

“We already know that many of our very best sprinters and marathon paddlers are proficient at stand-up paddling.

“Now they will have a chance to test themselves.

"It should add a fascinating angle to what is already shaping to be an exciting event.”

ISA executive director Robert Fasulo responded by reiterating how their body has "operated unimpeded as the governing body for both Surfing and Stand-Up Paddle (SUP), and in such capacity has organised annual SUP World Championships since 2012 where all of the world’s best SUP athletes have participated until now".

“In addition, the world’s top professional SUP athletes consistently participate in the APP World Tour, which is officially sanctioned by the ISA," he added.

"The APP Tour recognizes the ISA as the sole world governing body for SUP.

“We continue to work tirelessly to lead, grow and develop SUP worldwide in the interests of the global SUP community and athletes, just as we have done for the past decade.”