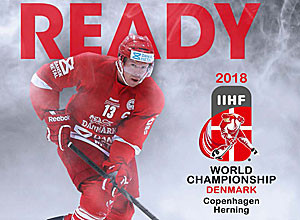 The International Ice Hockey Federation (IIHF) have announced that their target of 300,000 ticket sales for the upcoming World Championship in Denmark has been reached.

The IIHF claime that no other sports event in Denmark has previously generated such high ticket sales.

They also claim that even greater sales could be achieved as there are still tickets remaining for certain games at the Royal Arena in the capital Copenhagen and the Jyske Bank Boxen in Herning.

"Nobody initially believed that we could bring the IIHF Ice Hockey World Championships to Denmark, but we did," he said.

"Then nobody believed that we could sell 300,000 tickets, but we did that as well.

"The fact that we have managed to achieve this magic number before the start of the championship is fantastic, particularly when you consider that traditionally a large number of tickets are sold during the actual event.

"Now we are looking forward to the whole thing starting and being able to welcome the many Danish and international fans to Jyske Bank Boxen and Royal Arena, which are currently being transformed into two world-class ice hockey arenas."

The Mayors of Copenhagen and Herning also expressed their delight.

"It’s truly great work to have achieved the goal of 300,000 tickets sold before the first puck has even touched the ice," said Herning Mayor Lars Krarup.

"Here in the Municipality of Herning, we are really looking forward to Friday [May 4], when the World Championship starts in earnest.

"We would like to thank the World Championship company, Danish Ice Hockey Federation, Sport Event Denmark and Central Denmark Region for the constructive cooperation."

Lord Mayor of Copenhagen Frank Jensen added: "It is a huge pleasure for me, as co-host along with Herning, to offer the many players, volunteers and fans a warm welcome to Copenhagen.

"The Ice Hockey World Championships are a huge event, and I am looking forward, along with all residents of Copenhagen, to following the exciting matches in Royal Arena – hopefully with Danish participation in the final round weekend."

The IIHF World Championship are due to take place from May 4 to 20.