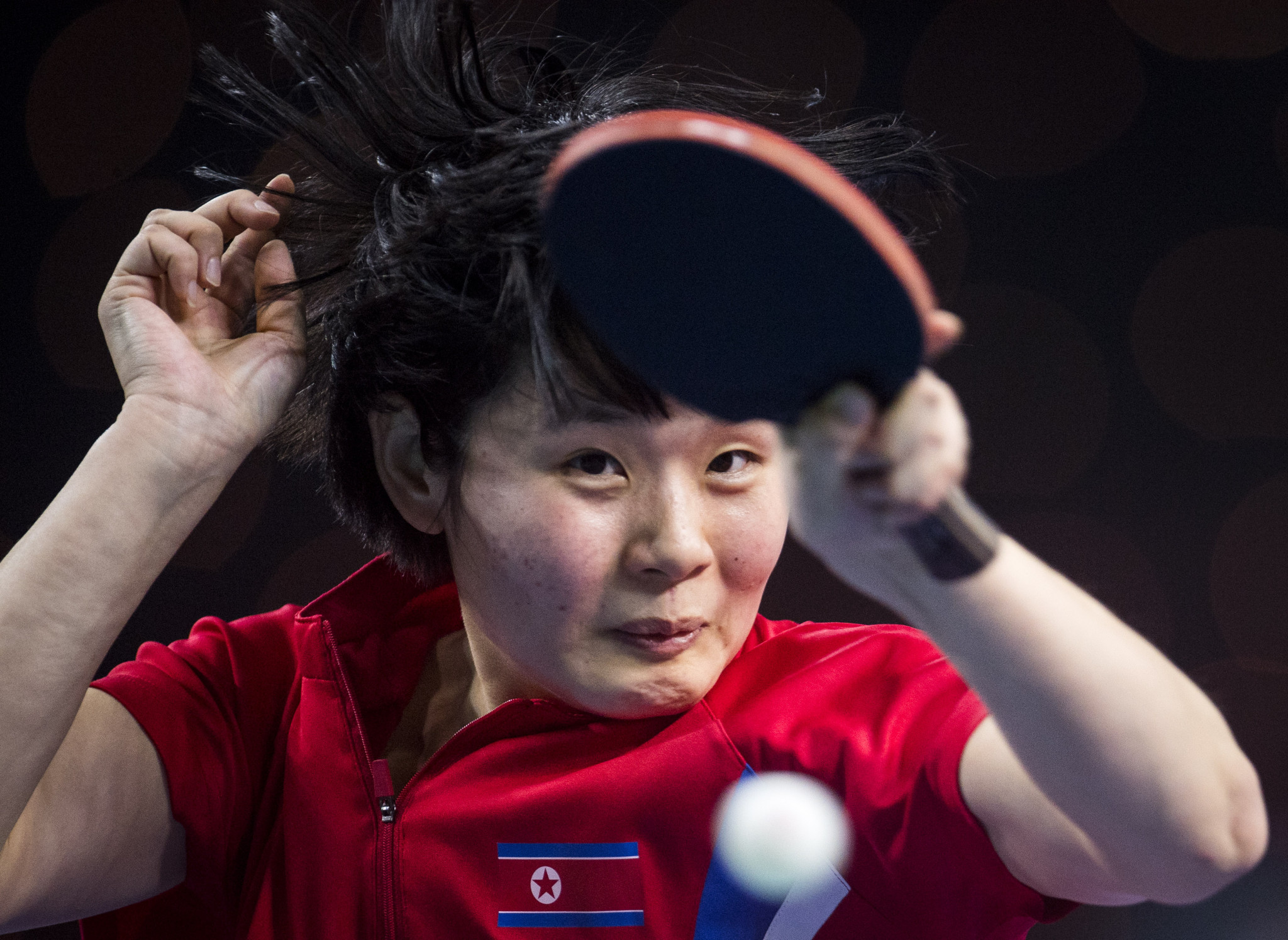 Having defeated The Netherlands and Chinese Taipei in their opening two Group C matches yesterday, the team funded by the International Olympic Committee (IOC) overcame the Czechs 3-0 at the Halmstad Arena in the Swedish coastal resort.

In all, a team of 12 athletes from the National Olympic Committee (NOC) of the Democratic People’s Republic of Korea (DPRK) is competing at the event thanks to the support of the IOC.

Olympic Solidarity is covering all costs related to the participation of the North Korean athletes, including air tickets and accommodation, working closely with the ITTF and the Swedish organisers.

This latest aid to athletes from the NOC of the DPRK follows the support for athletes to train, qualify for and take part in the 2018 Winter Olympic Games in Pyeongchang.

This support began in 2014 when the IOC started a special programme to help North Korean athletes qualify for Pyeongchang 2018, and ultimately led to the historic moment when the athletes from North and South Korea marched together as one team at the Opening Ceremony behind the unification flag.

The IOC has promised to continue to support DPRK athletes within the rules of the United Nations sanctions.

The ultimate aim is to help them qualify for the 2020 Olympic Games in Tokyo.

Chinese Taipei and Romania are tied for second place behind North Korea.

Defending champions China extended their winning start to three games in Group A.

The number one seeds beat Russia 3-0 today and are tied for first place with Singapore who defeated India by the same scoreline.

The other match in Group A saw Sweden overcome Belarus 3-1.

Japan and Austria both preserved their unbeaten records in Group B after claiming 3-0 wins over Hungary and Ukraine respectively.

Hong Kong and South Korea have yet to lose in Group D, meanwhile, with the former beating Germany 3-1 and the latter defeating Thailand by the same scoreline today.

In stark contrast to their women's team, North Korea's men's team have lost all three of their Group B matches.

They followed up a 3-0 defeat to Portugal yesterday by losing 3-2 to Russia and 3-0 to Czech Republic.

Holders China lead Group B with three wins out of three having beaten Czech Republic and Brazil 3-0 today.

The same can be said for top seeds Germany in Group A after they whitewashed Romania and Sweden.

England head Group C following 3-1 wins over Chinese Taipei and even more impressively Japan, who had beaten them in the semi-finals of this event in 2016.

The English trio of Paul Drinkhall, Liam Pitchford and Sam Walker were on fire against the second-seeded Japanese team.

World number 65 Pitchford was the hero of the night, beating world number 13 Tomokazu Harimoto 3-0 and world number 11 Jun Mizutani, the Rio 2016 Olympic bronze medallist, 3-1 to lead the team to victory.

"I’m over the moon and so happy for the team," Pitchford said.

"This morning Paul had given us a great start against Chinese Taipei and today against Jun Mizutani he played really well.

"His performances today really gave me confidence before I played Tomokazu Harimoto.

"I beat him at the World Team Cup in February and today I just tried to impose my game on him."

South Korea, meanwhile, are setting the pace in Group D having defeated Austria and India 3-0.

In contrast to the support offered to North Korea, Pakistan have been unable to take part in the tournament after being left stranded at Lahore Airport on their way to Sweden.

Pakistan's Federal Investigation Agency prevented the men's and women's teams from leaving the country because they did not possess the necessary documentation from the Interior Ministry.

They have so far forfeited all their matches.

Both the men's and women's competitions are made up of four groups of six.

The group winners will move to the quarter-finals, while the second and third-placed teams will move on to the round of 16.