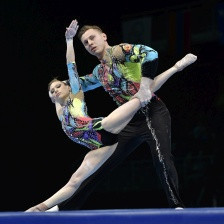 "She is the best," said her partner Georgii Pataraia after the successful defence of the title they had won two years earlier.

"She has got the best results for many years, maybe she is the best ever, in modern times, I think so."

The Russian duo’s routine for the final in the Lotto Arena in Antwerp had a difficulty rating more than half a point higher than any of their competitors and yet they comfortably secured the highest execution score.

It amounted to a mark of 30.640 points, a significant 1.31 points ahead of Belarus's Hanna Kasyan and Konstantin Evstafeev.

While the packed house showed its appreciation for Chernova and Pataraia's extraordinary efforts, the decibel levels went through the roof when Belgian mixed pair Marte Snoeck and Bram Roettger earned a medal.

For the 10th World Championships in succession, Russia walked away with the team title.

All three Russian groups finished first in their categories, with Israel, led by their famed men's group, claiming the silver medal and Belarus taking the bronze medal.

With five golds and a bronze medal Russia finished in its habitual position, top of the medals table.

Despite strong challenges from the ever-creative Israelis, the vibrant Belarusians and the precise Chinese, the powerhouse remains streets ahead of the rest.

"We have been thinking about this every day for two years," Daniel Uralevitch, who collected a silver at the 2016 World Championships, said.

"This opens doors in Israel in every way, it's history, it says that anything is possible and that Israel is on the map in acro[batic].

"All the time we have been quite close to them (China) so we knew it was possible to do it.

"We were just waiting for the score to see if the judges agreed with us and today they did."

Russia finished third with a score of 30.130 points.

While the Championships closed with Israel's historic first gold, the final day of competition had opened in a manner similar to many others, with Russian athletes proudly finishing atop the podium

Daria Guryeva and Daria Kalinina proved their mastery of the women's pair category with a captivating display of grace and elegant power.

With five gold medals and a bronze Russia finished in its habitual position, top of the medals table.