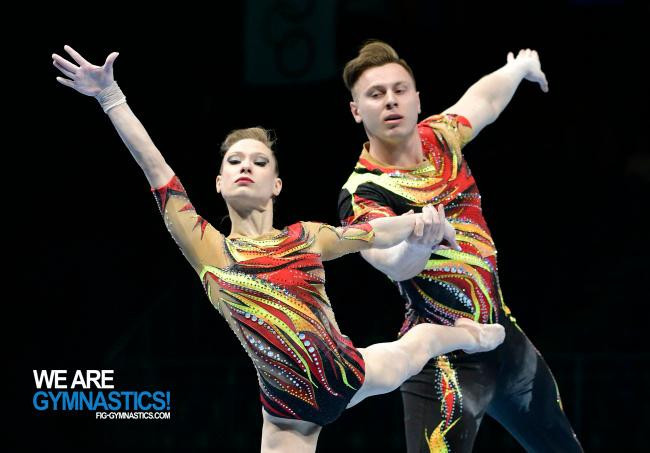 Russia’s Marina Chernova, seeking a third mixed pairs victory at the International Gymnastics Federation (FIG) Acrobatic World Championships, took a huge step towards that ambition on the first day of competition in Antwerp.

She and her partner Georgii Pataraia got their title defence underway convincingly in the Lotto Arena, establishing a huge lead of 2.02 points over the field after the opening dynamic exercise.

"It's very hard work what they do, it's very impressive," said Belarus' Artur Beliakou, who with partner Volha Melnik lies in third.

"We will have to upgrade our difficulty two-times or three times more to beat them."

For the pair themselves, it was not quite a perfect day at the office.

"We are satisfied, I would give us 95 per cent for that," Pataraia said.

It was a similar tale in the women's group with fellow Russians Daria Chebulanka, Polina Plastinina and Kseniia Zagoskina relegating the rest to a fight for second in the qualifying rounds.

After flawless dynamic and balance routines, the trio sit comfortably ahead of their opponents.

Despite a pair of immaculate performances from China's two leading quartets, it was another Russian team that stole the limelight in the men's group.

German Kudriashov, Alexander Sorokin, Valeriy Tukhashvili and Kirill Zadorin may just be fifth after the opening qualifying round, but their extraordinary new move, featuring three of them holding up the top via one-armed handstands made a huge impression.

"This move is very difficult, not everyone can do it, but as we had three tops and just one base [in their four] we tried it," Sorokin explained afterwards.

"We have other surprises for the next exercises."

Not all the favourites had it their own way, with the shock of the day coming in the women's pair where Russia's Daria Guryeva and Darya Kalinina fell unexpectedly during their balance exercise and now sit sixth.

Israel's Mika Lefkovits and partner Roni Surzon took advantage of the slip up by the 2016 World Championship and 2017 World Games gold medallists with a delightful routine pushing them into first position with two exercises to come.

A misstep in the morning balance exercise left them fourth before a strong showing in the dynamic left them second, behind 2017 World Games gold medal winners, Tim Sebastian and Michail  Kraft of Germany.

The Championships are due continue tomorrow with qualification for all five disciplines to be decided and the medals for men's pair and women's group handed out.