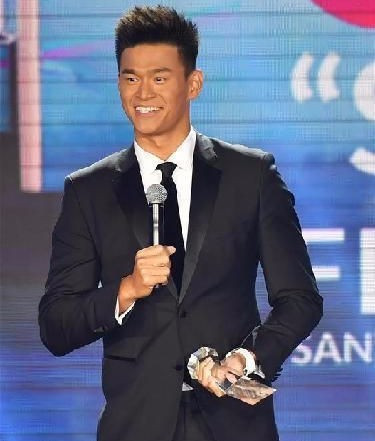 Three-time Olympic champion Sun Yang has been given the Outstanding Contribution to Swimming Popularity award by the International Swimming Federation (FINA), despite serving a secret doping suspension in 2014.

The Chinese swimmer, winner of Olympic gold medals at London 2012 and who claimed victory in the men's 200 metres freestyle at Rio 2016, received his prize at the FINA Soirée des Etoiles World Aquatics Gala in Sanya.

Sun being honoured with the award was not mentioned by swimming's worldwide governing body in a press release detailing other winners at the Gala in the Chinese city.

The 26-year-old could be seen as a controversial choice for the award after he was banned for three months in 2014.

He had tested positive for the banned stimulant trimetazidine.

His ban, which ran from May 17 to August 16, was only revealed in November.

Sun, also a nine-time world champion, had already returned to competition when the suspension was announced by the Chinese National Anti-Doping Agency.

He claimed that he did not know the drug had been handed to the World Anti-Doping Agency banned list.

It marked the latest misdemeanour involving Sun, a character no stranger to controversy having been held in police detention for seven days in November 2013 for colliding with a bus while driving his Porsche Cayenne without a licence.

"This award is certainly an encouragement to me," Sun, winner of the 200m and 400m freestyle double at this year's FINA World Championships in Budapest, said according to China's state news agency Xinhua.

"I'd like to extend my sincere appreciation to FINA, an organisation that endeavours to promote swimming worldwide all these years.

"It not only gives us athletes a level playing field but also spreads the glamour of swimming to all corners of the world.

"It's my great pleasure to be part of this great cause.

"I might have talent, but my success wouldn't be possible without help from my amazing mentors, encouraging teammates and loving family and friends."

Chinese sport was rocked earlier this year when a former doctor for the Chinese Olympic team, Xue Yinxian, claimed that all medals won by athletes from the country in 1980s and 1990s were achieved through a systematic doping programme existing across all sports.

China’s women came from relative obscurity to win 12 of the 16 gold medals on offer at the 1994 FINA World Championships in Rome, prompting further speculation of systemic doping within the team.

In a statement, FINA claimed they had a "robust" stance against doping and hoped the award would ensure Sun does not fall foul of doping regulations during the rest of his career.

"As you know, the event was held in China and this award only concerns the popularity of swimmers in China as requested by the China Swimming Association," the statement, sent to insidethegames, read.

"Despite our very robust stance against doping, FINA does believe in right of athletes to be given a second chance after serving a suspension and hopefully this award will encourage Sun Yang to continue his career as a clean athlete."