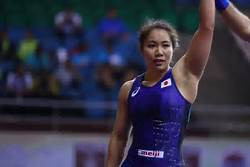 The four finals in the 55 kilogram, 58kg, 63kg and the 75kg categories of the Under-23 World Championships  at the Artego Arena in Bydgoszcz, Poland, were all won by Japanese participants.

The first final of the day saw 18-year-old Haruna Okuno triumph against Iryna Kurachkina of Belarus by a 5-2 scoreline.­

This was her second title of the year, having won gold at the Paris World Wrestling Championships in Paris back in August.

Yuzuru Kumano took the second gold of the day after thrashing Mongolian counterpart Battsetseg Altantsetseg by a 6-1 scoreline.

The 63kg saw a much closer affair as three-time Asian junior champion Ayana Gempei eventually managed to secure victory against Braxton Rei Stone of Canada by a 10-8 scoreline.

However, the final match of the day in the 75kg category, again between a Japanese and Canadian contest, was yet another thrashing, as Yasuha Matsuyuki defeated Gracelynn Doogan 12-2.

Tomorrow is the penultimate day of the event and once again features women’s wrestling events with medals in the 48kg, 53kg, 60kg and 69kg set to be contested.