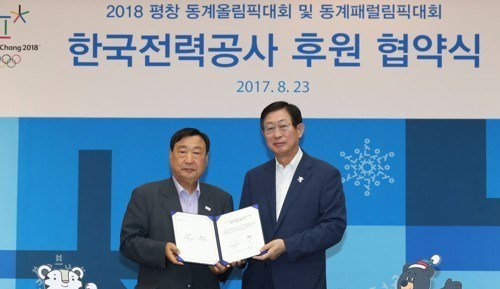 Korea Electric Power Corporation (KEPCO) will reportedly provide significant sponsorship for next year's Winter Olympic Games, it has been claimed.

KEPCO were officially confirmed as a tier one sponsor for Pyeongchang 2018 in August.

The sponsorship has reportedly provided 80 billion won (£54 million/$71 million/€61 million) of support, according to the South Korean news agency Yonhap.

The state-run public utilities company will help to provide infrastructure related to the Games, including the installation of energy-related facilities.

KEPCO were joined by its six affiliates in confirming their sponsorship of the Games.

Under the terms of the agreement, KEPCO will enjoy a wide range of marketing rights surrounding the Games.

This will include the rights to use the Pyeongchang 2018 logo in their advertising campaigns.

It has been claimed the sponsorship has taken organisers close to their overall target of 940 billion won (£63 million/$83 million/€72 million).

The Olympics in Pyeongchang are scheduled to take place from February 9 to 25 and the Paralympics are due to be held from March 8 to 18.

Pyeongchang 2018 has a total of 17 official supporters with the list also including Interpark, an online auction and shopping mall, and Ahnlab, a security software provider.