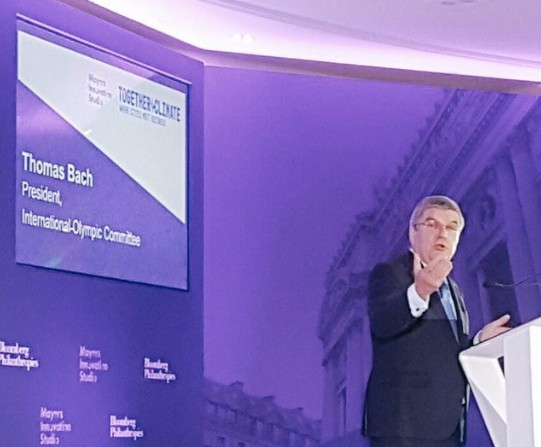 International Olympic Committee President Thomas Bach has joined Mayors from around the world attending a major summit in Paris on climate change.

Upon his arrival, Bach was met by Anne Hidalgo, Mayor of the French capital, and Tony Estanguet, the President of Paris 2024.

Bach is also expected to hold talks with Los Angeles Mayor Eric Garcetti, who is attending the C40 Cities Climate Leadership Group, coalition of more than 90 of the world's biggest cities.

Hidalgo and Garcetti will also sign a joint agreement on cooperation between the host cities of the 2024 and 2028 Summer Olympics tomorrow.

It is Bach's first official visit to Paris since the city was awarded the Olympic and Paralympic Games at the IOC Session in Lima on September 13.

He did, however, visit Marseille, the venue for the sailing last month where he met Hidalgo, Estanguet and French President Emmanuel Macron.

Hidalgo is head of the Leadership Group and Garcetti is one of 12 members of the organisation's Steering Committee.

Bach addressed the summit after arriving.

"My message to Mayors: sustainability is now a key element for organising and hosting the Olympic Games," he said.

"The new philosphy behind the Olympic Games has sustainability and partnership at its heart."

Hidalgo has called for a ban on petrol cars from the year 2030.

This would follow the proposed ban on diesel vehicles that is planned to be rolled out in 2024 to coincide with Paris hosting the Olympic and Paralympic Games that year.

Garcetti is one of several Mayors from United States cities who have taken on leadership roles on the climate change issue since President Donald Trump announced in June that he was pulling America out of the Paris Climate Accord,

"L.A. is a leader in this fight. We’re working with partners from around the world to learn new ideas, share our successes, and strengthen the work of cleaning up the environment and protecting health and safety for Angelenos and people everywhere."