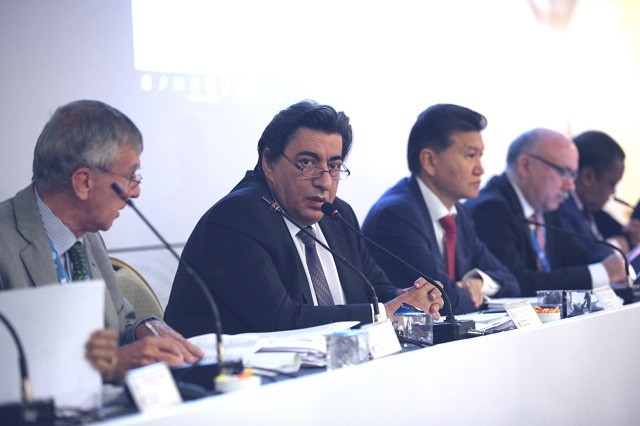 The World Chess Federation (FIDE) Executive Board has unanimously voted to keep Deputy President Georgios Makropoulos in charge of the organisation at its Congress in Antalya in Turkey.

In April, FIDE held an Extraordinary Presidential Board meeting in Athens after the governing body's website reported that President Kirsan Ilyumzhinov had resigned, a claim he denied.

The Board confirmed that Ilyumzhinov was still the President but the bulk of his powers had been devolved to Makropoulos.

During the Executive Board meeting at the Congress, which concluded yesterday, Makropoulos did not hold back when discussing the situation.

According to the FIDE website, the Greek said he felt "the Presidential Board and Executive team of FIDE had been defamed, threatened and insulted by an election campaign that Ilyumzhinov had initiated".

"Makropoulos mentioned that Ilyumzhinov is abusing the name of Russia and the President of Russia Vladimir Putin, in order to hide himself and excuse his team’s insults and threats to FIDE officers.

"Makropoulos said that Ilyumzhinov should stop doing this."

The FIDE Executive Board then unanimously voted to keep the FIDE Presidential power in Makropoulos.

In December, Ilyumzhinov had opted to withdraw from any legal, financial and business operations of FIDE to enable him to concentrate on solving a legal situation with the United States' Department of the Treasury.

He was placed on a US blacklist after officials claimed he had been "materially assisting and acting for or on behalf of the Government of Syria, Central Bank of Syria".

Ilyumzhinov denied the allegations but his blacklisting meant he could not attend last year's World Chess Championship in New York City.

During the meeting, FIDE treasurer Adrian Siegel proposed a motion that requested Ilyumzhinov not run in the next Presidential election.

The members voted 37-20 in favour of the motion with two abstentions.

However, the decision is not final and Ilyumzhinov can still decide whether to stand or not.