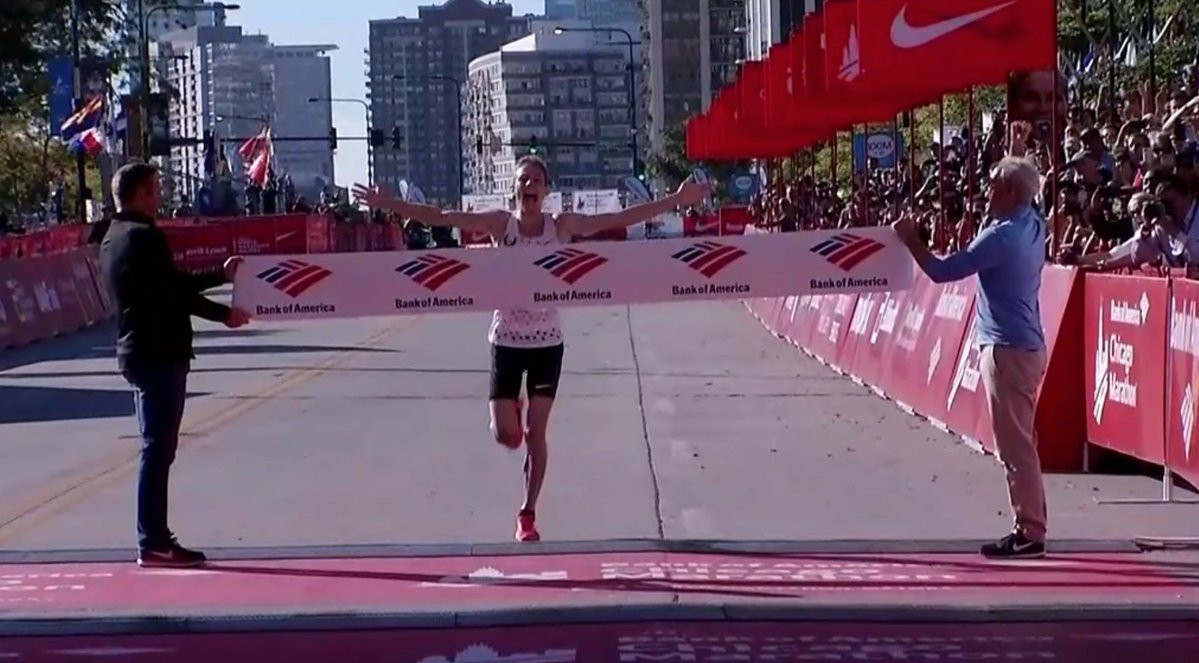 Galen Rupp and Tirunesh Dibaba continued their respective transitions from the track to the road by gaining superb victories at the Chicago Marathon today.

Rupp, competing in just his fourth marathon, surged clear of the rest of field in a tactical race with a 24th mile recorded in just 4min 30sec.

He held on to win in 2:09.20 to finish 28 seconds clear of defending champion and two-time former world champion Abel Kirui of Kenya.

Another Kenyan in Bernard Kipyego crossed third in 2:10.23 in a race which forms part of the World Marathon Majors series.

It made Rupp the first home winner since Moroccan-born Khalid Khannouchi in 2002 and the first American-born champion since Greg Meyer in 1982.

He made his marathon debut at the 2016 Olympic Trials before a surprise bronze medal over 26.2 miles at the Rio Olympics.

This was followed by second place at the Boston Marathon before victory today.

"You train so hard, year in and year out, day in and day out.

"To have a race like this where it all comes together and to be able to win in a city that really is such a special place to me given that my dad grew up here."

Congratulations to Tirunesh Dibaba, female winner of the 2017 #ChicagoMarathon, with an official time of 2:18:31! pic.twitter.com/r0CnMP03xI

His win came as the 31-year-old continues to strongly deny any wrongdoing as a United States Anti-Doping Agency probe continues into his coach, Alberto Salazar.

A leaked interim report earlier this year speculated that Rupp received an infusion of L-carnitine in January 2012 which "almost certainly exceeded" the legal amount.

Three-time Olympic champion Dibaba, meanwhile, produced a blistering time of 2:18.31 to win her first marathon in her third start,

It crowned a superb season for the 32-year-old after she followed second place at the London Marathon in 2:17:56 - the fifth fastest time ever - with a 10,000m silver medal at the World Championships.

The Ethiopian attacked shortly before the field passed halfway in 1:08.48 before breaking clear from Kenyan rival Brigid Kosgei in the 19th mile.

Kosgei hung on for second place in 2:20:22 as United States' superb day continued with third place for Jordan Hasay in 2:20.57.

The time made her the second-fastest American marathoner in history behind only Deena Kastor, who clocked 2:19.36 in 2006.

Kenya's defending champion Florence Kiplagat pulled out soon after halfway after losing contact with the leaders.

Tatyana McFadden completed the US success with an eighth win in the women's wheelchair race after a course record time of 1:39.15 - 1:55 off her 2015 mark.

She continued her recovery from blood clots suffered earlier this year by pulling ahead on the final incline to edge compatriot Amanda McGrory in a sprint finish.

McGrory finished in the same time as Switzerland's Manuela Schar crossed two seconds behind in third.

Marcel Hug ensured Swiss success in the men's wheelchair race with victory by over a minute in 1:29.23.

Kurt Fearnley of Australia finished a distant second in 1:30.24 as Jordi Madera Jimenez of Spain finished a further second back in third.