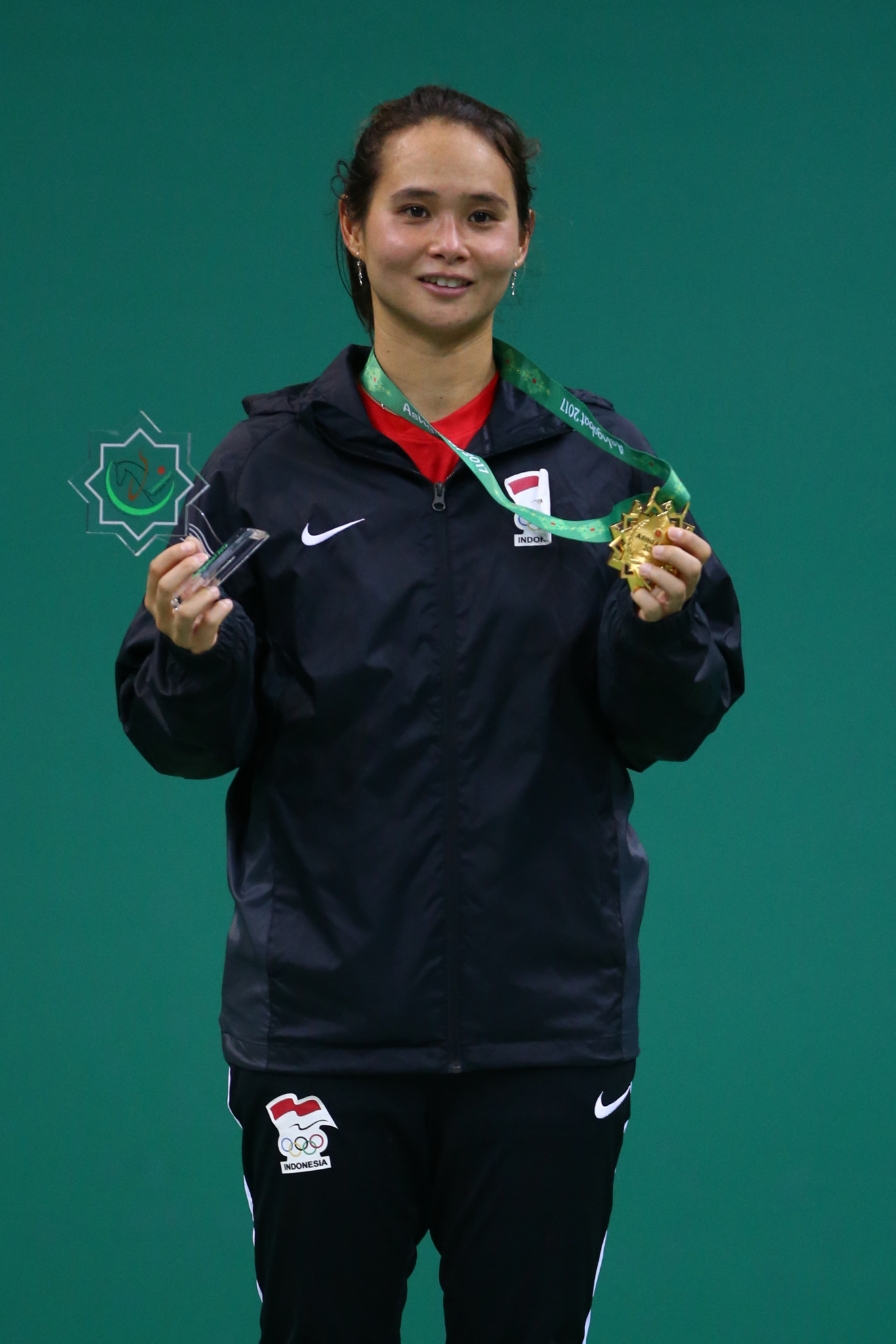 Sutjiadi saved an incredible 10 match points before finally succumbing to her Athletes Village room-mate 6-3, 3-6, 6-3 in an epic two-hour and 25 minute contest at the Indoor Tennis Centre.

At 5-1 up in the final set, Indonesian number one Gumulya seemed to have finally broken the resolve of her 22-year-old opponent, only for Sutjiadi to save four match points in clawing back to 5-3.

Then, when serving for the match a second time, Gumulya produced nervous misses while Sutjiadi hit the lines with courageous shots to save six more match points.

The drama was enhanced when the 4,000 spectators started booing as Gumulya missed good chances on her ninth and 10th match points.

But she ultimately had the experience and know-how to subdue her younger team-mate.

"I was worried I could lose it," Gumulya said after the first singles final in the AIMAG’s inaugural indoor tennis tournament.

"I had to fight so much but I was tiring.

"I went for too much.

But in the women's doubles, India's Ankita Raina and P. Thombare suffered an agonising 6-3, 3-6, 6-7 loss at the hands of Thailand's Tamachan Momkoonthod and Varunya Wongteanchai.

South Korea took away three gold medals on the final night of dancesport competition, upstaging favourites China who added just one title to the four they won in the standard dances yesterday.

Kang Munseong and Park Jisoo led the way for the South Koreans with victory in the cha-cha-cha and rumba disciplines at the Taekwondo DanceSport Arena.

Their triumph in the cha-cha-cha could not have been closer, claiming gold by just 0.001 of a point from China’s Jiang Jiahao and Zhao Wanzhen with 32.000.

Team-mates Nam Gi Yong and Shin Nara added to the gold medal haul in the final event as they took the jive section with 33.499 points.

Yan Bangbang and Zhu Jing did add to China’s medal tally thanks to victory in the paso doble with 33.083 points.

Kyrgyzstan’s Aleksei Kibkalo and Tatiana Kogadei registered the highest mark of any couple as they eased their way to the samba gold medal with 33.666 points.

Japan and Vietnam were the other nations to take gold medals across the 11 events spread over the two days of competition.

China topped the medal table with five golds, two silvers and one bronze.

Iran took home six gold medals from the men’s Greco-Roman wrestling competition at the Main Indoor Arena, but they did let two chances slip to enforce their domination after strong performances in quarter-final and semi-final matches.

Their lost opportunities became golden moments for Kazakhstan and Kyrgyzstan, while Japan won their first wrestling title at Ashgabat 2017.

In the under 59 kilograms final, Kyrgyzstan’s Kaly Sulaimanov pinned Iran’s Mohsen Haji Pour to the mat to win 3-1.

Amin Souri also had a shot at top honours for Iran in the under 66kg final against Kazakhstan’s Daniyar Kalenov, but his opponent got the better of him to triumph 2-1.

Iran finally broke through for gold in the under 71kg final as Farshad Belfakeh beat Turkmenistan’s Ali Seýhow 11-2.

In the under 80kg match-up, Kyrgyzstan’s Atabek Azisbekov lost 3-2 to Iran’s Mahdi Ebrahimi.

Iran increased their gold medal haul to four in the under 85kg event when Saman Azizi overcame India’s Ravinder Khatri 4-1.

Among the dominance of the central Asians in the competition came Japan’s Yuta Nara's 4-1 victory against local hope Aslan Kuliýew in the under 98kg class.

Iran’s Amirhossein Hosseini and Kyrgyzstan’s Uzur Dzhuzupbekov engaged in a fierce battle, which the former won 3-2.

The brute force of Behnam Mahdizadeh Arpatapeh in the under 130kg final then overpowered the stubborn strength of India’s Naveen to give Iran its sixth gold of the evening.

Turkmenistan finished with two gold medals as the kickboxing competition at Ashgabat 2017 came to an end.

H. Geldimämmedow picked up where his team-mates left off on day three by claiming the host nation’s third gold medal at the Muaythai Kickboxing Arena.

He beat Tajikistan’s Farhod Rasulov in the men’s kick light under 74kg category.

Goçmyrat Jumanyýazow made it four gold medals for Turkmenistan in the final bout of day four, overcoming China’s Yuan Bing in the men’s low kick under 71kg final.

In between, Mekan Amanow won a silver medal after losing his final against Kazakhstan’s Maxat Ussip in the men’s full contact under 67kg.

In the women’s under 68kg competition, Dildash Kuryshbayeva was too good for compatriot Markhabat Kuatbekova to add another gold medal to Kazakhstan’s AIMAG campaign.

It came after his opponent in the final, Turkmenistan’s Serdar Hojamuhammedow, withdrew because of an injury.

Elsewhere today, China were represented in all four of the rapid team chess finals today and came out on top in two of them.

One of the East Asian nation’s victories came in the women’s senior event with Tan Zhongyi and Lei Tingjie avenging a preliminary-round defeat to Indonesia’s Irine Kharisma Sukandar and Medina Warda Aulia in the final.

China also triumphed in the men’s under-23 final as Wei Yi and Xu Yinglun beat the Philippines’ Jan Emmanuel Garcia and Paulo Bersamina at the Chess Arena.

China’s Zhao Xintong claimed top honours in the final action of the billiard sports as he closed out a match full of near-misses to win the men’s snooker singles title with a 4-2 victory over Iran’s Hossein Vafaei Ayouri.

It was China’s second gold of the day, which put them at the summit of the table with eight medals, after Chen Siming won the women’s 10-ball pool singles crown.

She beat the Philippines’ Rubilen Amit 7-5.

Kyrgyzstan’s Yzatbek Ratbekov was the other winner on the final day of the eight-day programme, taking the men’s Russian pyramid combined title with a 5-1 win over Kazakhstan’s Alibek Omarov.