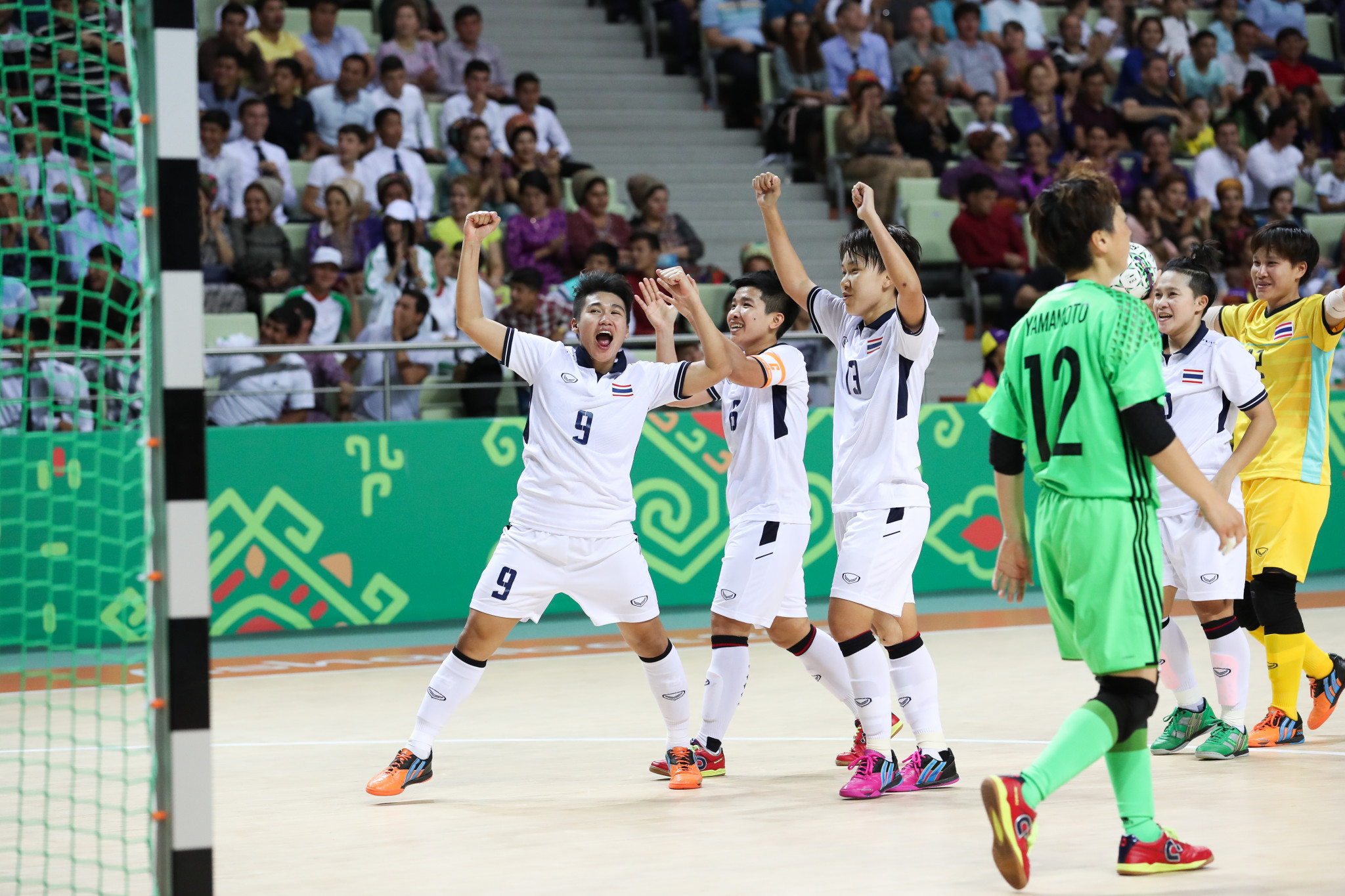 A disciplined and resolute Thailand team triumphed 3-1 in a tight and tense final at the Multifunctional Sport Venue.

It ends their quest for an AIMAG gold medal, having won two silvers and two bronzes from previous editions.

"I said before the tournament began we were the gold-diggers and now we have found gold," Thailand manager Krisda Sajakal said.

"Finally we did it and it's an unbelievable feeling.

After taking the lead on 14 minutes through Jiraprapa Nimrattanasing, Thailand were content to absorb Japan’s pressure.

They held out until 35 minutes when Akari Takao equalised, but Thailand were back in front just a minute later through Darika Peanpailun.

In a desperate power play, Japan threw goalkeeper Shiori Nakajima upfield in search of a second equaliser, but with the goal unguarded, Jenjira Bubpha added Thailand’s third with a long range shot into the empty net.

It meant Thailand had gone through the tournament with an impressive unbeaten record.

Iran were comfortable winners in a one-sided contest for the bronze medal, securing a 5-1 victory over China.

They were three goals ahead inside the first 10 minutes and there was no way back for China after that.

In short course swimming, five of the seven finals on the last day of competition resulted in new Games records being set.

Kazakhstan’s Adil Kaskabay and China’s Sun Meichen were among the other record breakers in winning the men’s and women’s 100m freestyle events respectively.

There were also Games records for South Korea’s Kim Daleun, who claimed victory in the women’s 50m breaststroke in 30.88, and China in the men’s 4x100m medley relay, which they won in 3:29.75.

The two other gold medallists today were Kazakhstan’s Roman Trussov in the men’s 100m individual medley and Hong Kong in the women’s 4x100m medley relay.

China increased their gold medal tally in wrestling to five after winning three of the eight freestyle finals held today at the Main Indoor Arena.

The fight of the night was arguably between China’s Xu Rui and Kazakhstan’s Ayaulym Kassymova, with the former winning 10-8 in the women’s under 63kg gold medal match.

Home nation Turkmenistan’s first chance of a wrestling gold medal at Ashgabat 2017 came through Saparmyrat Myradow in the men’s under 61kg event, but Iran’s Iman Sadeghikoukandeh had other ideas and won the final 11-0.

The hosts’ second chance came via Batyr Orazgylyjow in the men’s under 70kg event, only for Bahrain’s Adam Batirov to earn an 8-4 victory in the final.

Iran’s Ezzatollah Akbarizarinkolaei won his country’s second gold medal of the night, proving himself the stronger fighter against Uzbekistan’s Umidjon Ismanov in a 9-2 success.

Uzbekistan’s Davit Modzmanashvili, a London 2012 Olympic silver medallist when competing for Georgia, blocked China’s bid for a fourth gold medal of the evening after subduing Wurenbilige in the men’s under 125kg final to prevail 8-0.

There was disappointment, though, for Turkmenistan’s Gülzada Jorakulyýewa, who started today’s evening session by losing 2-1 to Tajikistan’s Mijgona Samadova in the women’s kick light under 60kg final.

In the men’s full contact under 57kg final, Pygy Silabow was not strong enough for Kyrgyzstan’s Avazbek Amanbekov and lost 3-0.

Iran, who were top of the medal table after the first two categories yesterday, added to their total with two victories at the expense of Iraqi opponents.

Kerimberdi Döwletow had started the gold medal rush as he beat Kyrgyzstan’s Orozbek Abtandil Uulu in the men’s combat under 62kg final.

There was more drama as Zafar Madaminow bagged Turkmenistan’s last gold medal of the day.

The 38-year-old was 5-0 down against two-time World Championship silver medallist Olim Khudaykulov of Uzbekistan before coming back to level the contest at 5-5.

The referees had first awarded Khudaykulov the victory, but reversed their decision after protests from the Turkmen team.

Kazakhstan’s Dinara Zhumabayeva was the only athlete who managed to beat a Turkmen in a final today, triumphing over Zyba Orunowa in the women’s under 64kg.

Qiu Yuming and Wei Liying triumphed in the slow foxtrot and quickstep with points totals of 34.082 and 34.142 points respectively at the Taekwondo DanceSport Arena.

There were also two gold medals for the Chinese pairing of Yuan Shaoyang and Qi Chongxuan, winning the waltz with 33.333 points and tango with 33.499.

Japan’s Takeshi and Tomomi Yamamoto had to settle for silver in the slow foxtrot to their Chinese rivals, but they made amends in the Viennese waltz, where they struck gold with 32.291 points.

Vietnam’s Nguyen Trung Kien and Pham Hong Anh proved two of the most popular winners, with an energetic display in the salsa that earned them an unrivalled 32.250 points.

The first indoor tennis gold medal went the way of Thailand's Nuttanon Kadchapanan and Nicha Lertpitaksinchai, as they registered a shock 5-7, 6-4, 6-2 win over India’s Jagadeesan Vishnuvardhan and P. Thombare in the mixed doubles final.

In billiard sports, India’s Sourav Kothari ended a run of three successive titles for Thailand’s Praprut Chaithanasakun in the men’s English billiards singles with a 3-1 win.

Lv specialises in snooker and had never played pool before replacing the injured Wu Jia Qing.