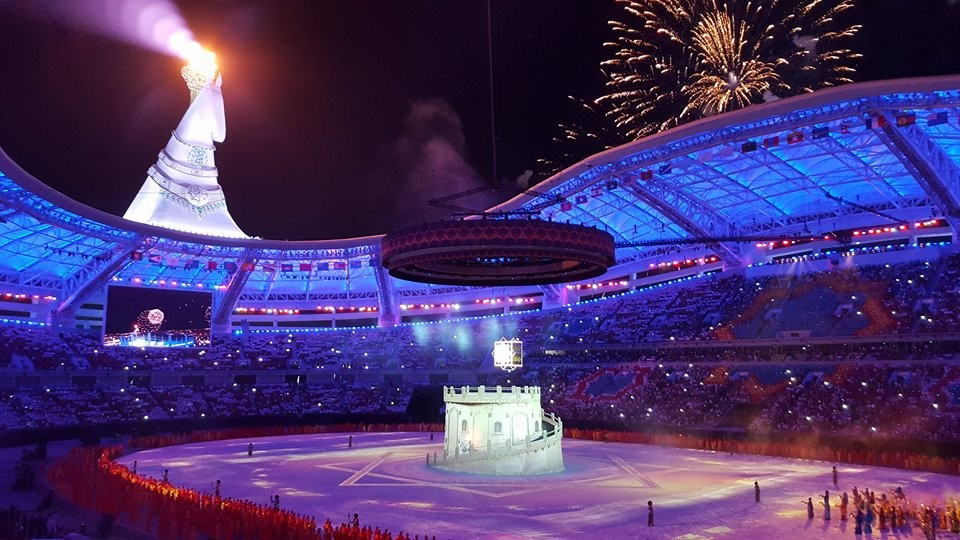 An Asian Indoor and Martial Arts Games heralded as the most important event in the history of Turkmenistan was officially declared open here today in a grand and extravagant Opening Ceremony.

The marathon Ceremony took place in a full 45,000 seat Stadium especially renovated for these Games and featured a parade of athletes from 65 countries, from Oceania and Africa, as well as Asia.

There was an opening by Turkmenistan President Gurbanguly Berdimuhamedow which fell either side of long segments celebrating local history and culture.

A Guinness world record breaking 600-tonne horse's head on the top of the stadium gazed down at proceedings.

Highlights included an equestrian acrobatics performance more befitting for a circus in which cartwheels and handstands were performed at great speed on galloping horses.

It was followed by the arrival of more horsemen arriving to complete a 500-day Torch Relay.

The emblem on top of the horse's head was lit - eventually, following several unsuccessful attempts - by traditional rider Pygy Baýramdurdyýew to declare the Games officially open.

A typically exuberant firework display then brought the curtain down on an event lasting almost three-and-a-half hours.

Berdimuhamedow had earlier received a standing ovation approaching five minutes in length before he delivered a lengthy address in Turkmen - starting at precisely 20:17 - in which he concluded that a "love for sport is a love for life".

He was followed by Olympic Council of Asia President Sheikh Ahmad Al-Fahad Al-Sabah, who singled out the historic participation of Oceania at an Asian Games for the first time, as well as the presence of an all-South Sudanese refugees team.

"I have followed very closely the progress and preparations of the Executive Committee over the past few years, and witnessed the development of the magnificent Ashgabat Olympic Complex," Sheikh Ahmad, who missed last week's International Olympic Committee (IOC) Session in Lima in order, he claimed, to oversee preparations for this event, said.

"From my experience, I know that the hosts will put on a special show for the Opening Ceremony - and that the visitors from Asia and Oceania will witness a colourful spectacle they will never forget.

"We would like to welcome athletes from Oceania who are participating at the Asian Games for the first time.

"As a sports family, we have an obligation to ensure sport can reach every part of the world.

"The IOC under Thomas Bach are making sure that men and women from all parts of the world can have a chance to play sport - that is why we have a refugees' team.

It shied away from any international performer of the scale of Lady Gaga, who featured at the opening of the 2015 European Games in Baku, and instead celebrated local music such as by "unique talent" Jemal Saparova.

Over 7,600 performers also participated, of which over 2,000 were professional singers, dancers and musicians.

It began by chronicling a journey through the history of the land that is now Turkmenistan.

This included a "journey of discovery" of ancient cities of the past evoking the Silk Road as well as the Karakum Desert,  heralded as the birthplace of Turkmen culture.

A giant cylinder sat in the centre of the Stadium throughout in order to represent the "core" of the nation and function as a "source of energy" for the show.

References to historical findings in the region - including a toy cart from Altyndepe dating back to 3,000-2,000 B.C. and considered the earliest evidence of the wheel in Central Asia - also featured.

Other sections celebrated modern Turkmenistan and consisted of frequent references to the watching Berdimuhamedow, the rise of Ashgabat and the discovery of gas reserves in recent decades.

Belt wrestler Rejepaly Orazalyyev recited the Athletes' Oath as one of the country's most traditional sports was also referenced.

It set into a motion an 11-day sporting event due to continue until September 27.