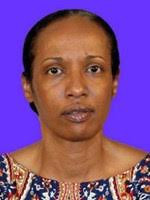 Association of National Olympic Committees of Africa (ANOCA) members who do not support a campaign to hold an Extraordinary General Assembly (EGA) following the controversial meeting in May are "supporting the lie" and are complicit in its continued cover-up, it has been claimed.

Djibouti National Olympic Committee (CNOSD) President Aicha Garad Ali, the driving force behind the proposal to stage an EGA in Prague in November, made the claim in a letter sent to the membership of ANOCA.

Ali, a member of the International Olympic Committee (IOC) due to attend the Session here this week, defended her motives for launching the campaign following the disputed result of the ANOCA Presidential election at the General Assembly in Djibouti in May.

Opponents claim ANOCA's members were deprived of their constitutional rights at the controversial meeting, where Lassana Palenfo was re-elected by acclamation after rival Hamad Kalkaba was barred from standing by the Executive Committee.

Kalkaba, President of the Cameroonian Olympic Committee, was referred to the IOC Ethics Commission after he was accused of illegally using the Government in Cameroon to campaign on his behalf.

He denies the allegations.

The IOC Ethics Commission refused to interfere and instead told ANOCA to rectify the issue internally.

This decision was not communicated to the ANOCA General Assembly, however, which forms the main basis of the complaint from Djibouti and led to the calls from the CNOSD for a new meeting to be held.

A fresh election could be held if the proposal from Djibouti, which insidethegames understands is gaining support within the African NOCs, gains the required two-thirds majority.

ANOCA will also be forced to hold a new election for the top job if the Court of Arbitration for Sport uphold an appeal from Kalkaba over his exclusion as a candidate.

Palenfo claimed, however, that holding an EGA alongside the Association of National Olympic Committees (ANOC) General Assembly in Prague in November would be "premature" and would "most likely not reach a fair solution".

This was criticised by Ali, who accused the Ivorian of misleading the membership in his response to her original letter last month.

In an additional letter, seen by insidethegames, Ali has urged the African NOCs to support their campaign as "not supporting this General Assembly means we are in support of the lie we were told in Djibouti and we want to continue to cover it up".

She also warned that Africa would remain a "divided continent if this matter is not addressed".

"There is nothing wrong in holding this meeting unless we want to continue to hide something," she added.

insidethegames understands an emergency Executive Committee meeting will take place on November 1, with the current dispute set to dominate the agenda.

It is unlikely that a new election for the President will be held this year if the campaign led by Djibouti is successful.

The EGA would merely pave the way for an election to take place.

Ali insisted she was not campaigning for the role herself and her intentions were simply to "protect the integrity of our continent".

"But for now it is imperative for us to come together as responsible people to address this problem which is touching our dignity and our integrity.

"Candidates should stand for positions and win or lose legitimately and not as a result of manipulation, lies and deceit."