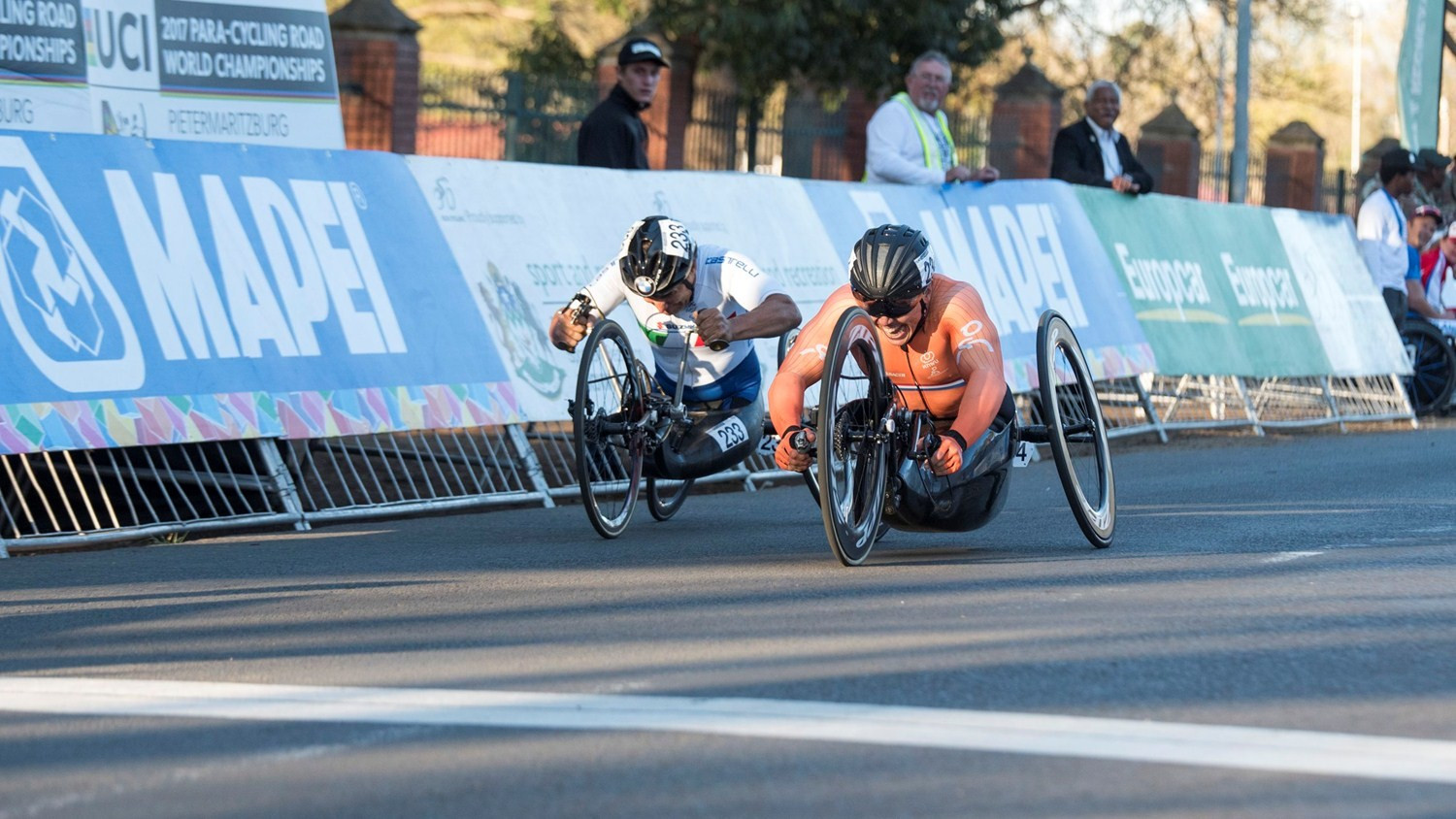 Italy's multiple world and Paralympic champion Alessandro Zanardi was beaten by half a wheel in the men's H4 road race at the International Cyclng Union (UCI) Para-cycling Road World Championships in Pietermaritzburg as Tim de Vries of The Netherlands earned a historic win.

It was the Dutch competitor's first win over the former Formula One driver at World Championship level, and his reaction after the last race of the third day's schedule was as you might have expected.

"I worked hard for this and I am so happy," he said.

Early in the 10-lap race, Zanardi's team-mate Diego Colombari took a commanding lead which the bunch only reined in with three laps to go.

"It was such a tactical race," added de Vries.

"I started to panic a bit between the fifth and sixth lap but together with Luis Costa we worked to close the gap.

"Then my aim was just to stay on Zanardi's wheel until the final sprint."

The South African crowd were delighted to see their own Nicolas Pieter du Preez claim gold in the MH1 race, turning the tables on Switzerland's Benjamin Früh who had beaten him in the time trial two days earlier.

"I was actually rather annoyed about the time trial," said the road race UCI world champion.

"I hadn't lost a race since 2014, but I wasn't firing on all cylinders Thursday."

He made up for that disappointment today, playing a perfect mental and tactical game to finish 45 seconds ahead of the young Swiss athlete.

Italy earned the first two gold medals of the day through Francesca Porcellato in the WH3 and Luca Mazzone in the MH2, both already crowned time trial champions two days earlier.

Porcellato took command of her race from the start, going into the lead on the first of seven laps and never looking back, to finish with a lead of 5:21 over second-placed Anna Oroszova of Slovakia.

"It was like another time trial," said the Italian.

"I dropped the other girls on the first lap and waited for them to come back but they never did."

Fellow Italian Mazzone spent a long time alone at the front of the MH2 bunch until William Groulx of the United States rejoined him at the head of the race.

"When I saw him come back, I went harder and pulled away again," Mazzone said.

At the finish line, 1:12 separated the two athletes, with Spain's Sergio Garrote Muaoz in third, nearly three minutes further back.

Germany celebrated three double champions as Christiane Reppe in the WH4, Andrea Eskau in the WH5 and Hans-Peter Durst in the MT2 all added road race success.

The two women again put in dominating demonstrations after their time trial golds two days ago, while Durst was not sure of victory until the last few hundred metres.

WT2 Paralympic champion Carol Cooke of Australia, winner of the time trial, won back the road race rainbow jersey she had lost to American Jill Walsh in Nottwil in 2015.

"After Nottwil I realised I needed to learn about tactics, cornering and reading a race," Cooke said.

"I used to ride out front alone but the women are getting so strong now."

The last day of competition tomorrow will include road races for all the C and B classes as well as the H1-5 team relay.