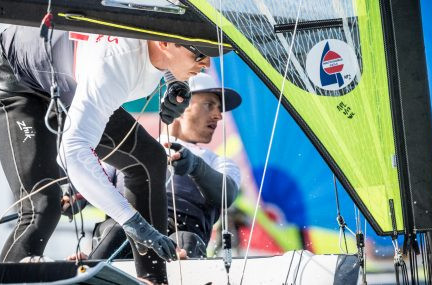 Fog which held up the opening two days of qualifying races for Olympic skiffs at the 49er and 49erFX World Championships at Matosinhos, near Porto, relented this afternoon to allow some sailing to take place, and after three qualifying races in the men’s 49er class the leaders – after scores of 2,2,5 - were Britain’s James Peters and Finn Sterritt, who earned European bronze medals last month.

There are 11 British teams in the 49er class but Peters and Sterritt are the only ones in the top 10 – a situation that is likely to change when the stronger breezes that have been forecast arrive tomorrow.

German 49er sailors had a very successful first day of racing, with Rio 2016 bronze medallists Tommy Ploessel and Erik Heil finishing the day in third place, ending the day with a 1,2 in the final two races.

The women’s 49erFX fleets were only able to complete two races for each of their two courses,

But, despite missing a few months of training and the European Championship, Rio 2016 silver medallists Alex Maloney and Molly Meech of New Zealand indicated they were back on the form they showed when winning the first ever FX World Championship in 2013 as they took the lead with four points.

"We took it easy in the morning thanks to frequent updates on Facebook from the class, so we came down fresh and well-rested and had a great day on the water," said Hansen.

"The wind was really nice and we felt good around the course, and we’re looking forward to more of everything tomorrow: More wind, more racing, more sun…"

It was not so nice for Germany’s European champions Tina Lutz and Sani Beucke, who scored a 16,17 to sit in 35th place after two races.

"We’re not sure what’s going on, so we’ll just forget about today and start fresh in the morning," said Beucke.

European weather models are now predicting the return of the full fury of the Portuguese Trade Winds – the boisterous 15-25 knot northerly breezes that helped propel Portuguese sailors around the world during the Age of Exploration – by tomorrow afternoon.

Good news for a Championships that are due to end on Saturday (September 2).