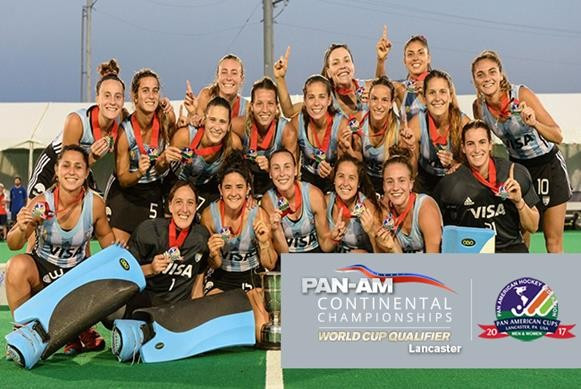 Argentina won the women's title at the Pan American Hockey Cup for the fifth time in a row after a 4-1 win over Chile in the final in the United States.

The four-time Olympic medallists added to the men's triumph yesterday with victory at the Spooky Nook Sports Complex in Lancaster in Pennsylvania.

It is a victory which also sees Italy qualify for next year's Women's Hockey World Cup in London.

The Argentinians had already qualified through the Hockey World League semi-finals, so the spot reserved for the continental champions has been passed to the Italians, the next best finishers at that competition after their sixth-place result in Brussels.

Las Leonas were made to work hard for their victory in today's final, with Chile goalkeeper Clauadia Schuler making a string of early saves.

Julia Gomes and Julieta Jankunas finally found a way through towards the end of the first quarter, with Maria Granatto and Noel Barrionuevo's penalty stroke adding extra gloss to the scoreline.

Chile, whose silver medal is their highest-ever finish, grabbed a consolation through Sofia Walbaum.

The Americans, the number four side in the world, were shocked by Chile in the semi-finals but recovered to at least seal a spot on the podium.

The Women's World Cup in London will be played between July 21 and August 5 next year.