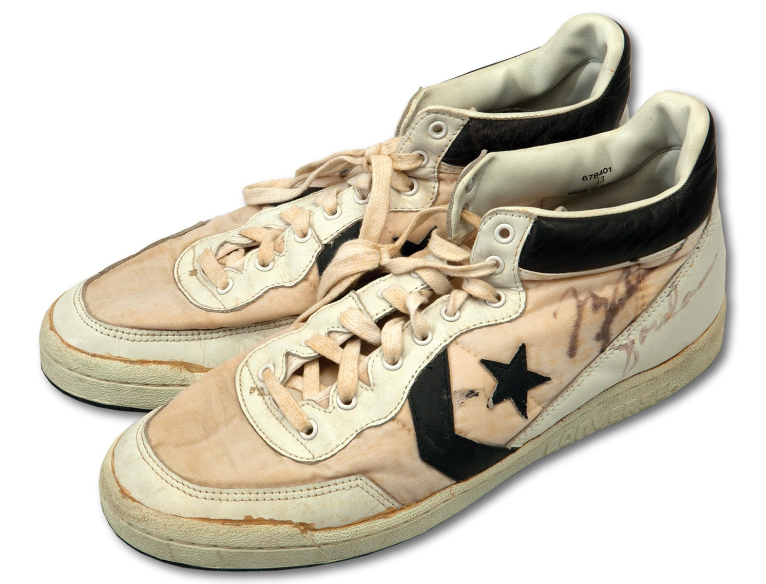 Trainers and a basketball jersey worn by Michael Jordan at the Los Angeles 1984 Olympic Games have achieved record prices at auction.

The trainers were used in the Los Angeles 1984 Olympic basketball final, where the United States enjoyed a comfortable 96-55 win over Spain to claim gold.

A ballboy was given the autographed trainers at the end of the tie, but the owner recently opted to put the memorabilia up for sale.

An auction had been due to take place in 2014, but ultimately did not go ahead.

“The shoes come with impeccable provenance from the ball boy, who worked nearly every USA game at the Forum,” the SCP Auctions stated when promoting the lot.

“This ball boy just so happens to be the son of Laker great Gail Goodrich, who oversaw game operations at The Forum for the entirety of the Olympic tournament.

“A detailed letter of provenance from Goodrich’s son explains the story of how this fortunate 11-year-old ball boy procured the shoes directly from Jordan and got them signed in the locker room right after the gold medal final.”

The match proved to be Jordan’s last as an amateur player, with the American becoming a professional for the Chicago Bulls after the Games.

According to ESPN, the auction surpasses the previous record for a pair of trainers, which Jordan was also responsible for.