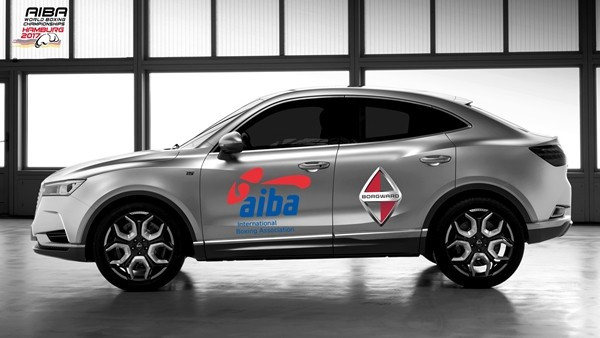 The International Boxing Association (AIBA) has announced a deal with German car manufacturer Borgward to become the main sponsor of the 2017 World Boxing Championships in Hamburg.

Due to take place between August 25 and September 2 at the city’s Sporthalle Arena, the tournament will be able to count on the financial and logistical support of one of the host country’s most historic automobile companies.

In 2008, Christian Borgward, grandson of original owner Carl F. W. Borgward, together with his partner Karlheinz L. Knöss, founded Borgward AG after the original company was forced into liquidation by creditors in 1961.

The agreement includes significant financial support for the competition as well as the use of Borgward’s newly developed sport utility vehicles for transport during the tournament.

"We are delighted to have secured Borgward as our main sponsor for this year’s AIBA World Championships," said AIBA President C K Wu.

"The agreement shows that the hard work AIBA has done to build boxing’s stature is being recognised in new and exciting markets, and we welcome Borgward to the AIBA family for these World Championships and beyond as yet another high-level partnership that will benefit our sport at all levels."

The brand will benefit from global exposure via live television coverage, highlights packages and social media campaigns across all territories, as well as in the ring, the mix zone, fan zone and all promotional materials and tickets.

The Borgward Boxer of the Tournament will be voted for by AIBA Twitter followers at the end of the competition.

"The Olympic spirit embodies many of the values that our company represents, and the AIBA World Championship is the biggest boxing tournament in the world," Tom Anliker, vice-president of marketing, sales and services at Borgward Group AG, said.

"The association is an excellent opportunity for us, and Borgward looks forward supporting AIBA, the German Boxing Federation and the city of Hamburg to hold an exceptional boxing tournament."

Earlier this month AIBA also announced a deal with Adidas.

The deal will see the global sportswear giant provide the latest equipment to the competing athletes along with an "enhanced spectator experience".

The partnership deal also includes the provision of gloves, bandages and uniforms for athletes and volunteers.

An interactive boxing booth, including a unique speed challenge, will be put in place in an effort to "bring fans even closer to the action".