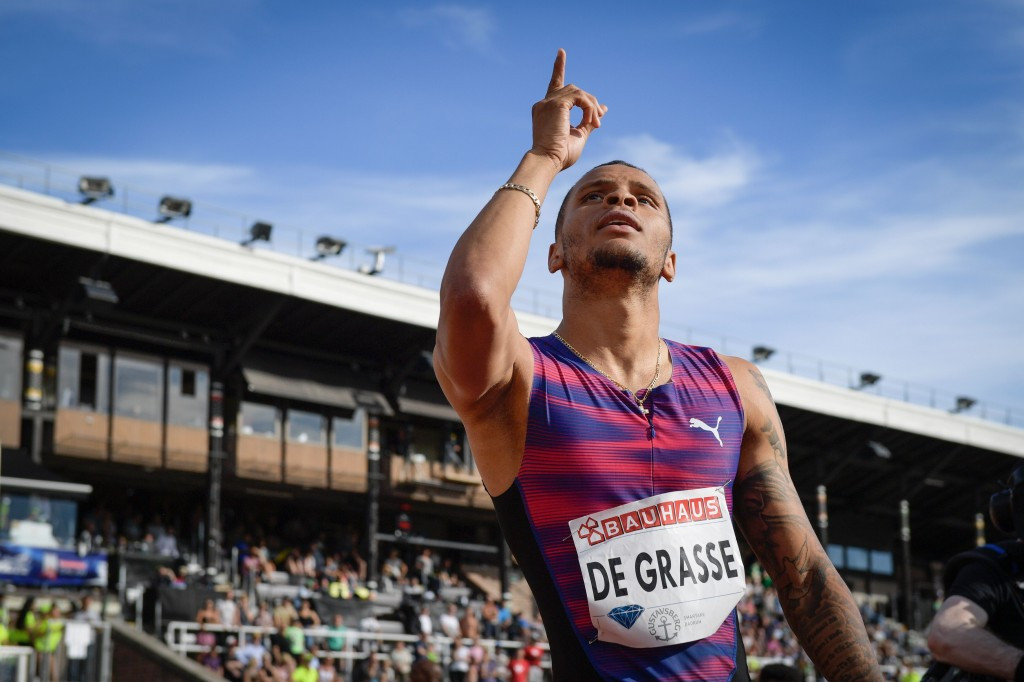 Andre De Grasse produced the fastest 100 metres of the season - and his quickest ever - as he took advantage of a huge following wind to win at the sixth International Association of Athletics Federations Diamond League meeting of the season here in 9.69sec.

A wind speed of 4.8 metres per second - well above the allowable limit of 2.00mps - annulled the time for record purposes, but it was a timely boost for the 22-year-old Canadian Olympic bronze medallist and 200m silver medallist.

He will now head for the London World Championships in August and a final showdown with the retiring Godfather of the Sprint, Usain Bolt.

"It was a shock to me when I saw the time on the board, I just wanted to run sub-10 and I didn't feel in the shape to run that fast," said De Grasse after his startling effort at the BAUHAUS-galan Games in the 1912 Olympic Stadium in Sweden's capital.

"I'm really happy about it, it's a good start to the season, I'm just looking forward to running that fast legally.

"I had a great start; I felt pretty good coming out, so I knew I had my top end speed coming out, I just had to hold it and finish strong.

"I felt the wind when we were lining up at the line but when we went into the blocks and started racing I didn't really feel the wind.

"That's the fastest I've ever run ever, it's going to be a shock to the body and tomorrow's going to hurt a little bit.

"I'm just looking forward to the next race and to see what I can do legally."

On a day when the wind gave everyone in the field fantasy figures, Ben Youssef Meite of Ivory Coast was second in 9.84.

In third place, with a time of 9.89, was Jamaica's Ryan Shields, who had qualified for one of the three empty places left in the elite race by winning the B race in 10.19.

There were only to have been two places to fill in the final, but two became three following the precautionary withdrawal of Britain's Adam Gemili with a niggle behind his knee.

Immediately before De Grasse's fast flourish, Cheruiyot won a 1,500m race which indicated his illustrious compatriot and triple world champion Asbel Kiprop still has a way to go if he is to win a fourth consecutive title in London this summer.

The 21-year-old Cheruiyot finished seventh in the Beijing final where Kiprop last struck world gold in 2015, but here he earned greater rewards as he took control of the race around the final bend, holding off the challenge of Bahrain’s Alsadik Mikhou, who was second in 3:31.49, and Ethiopia's Aman Wote, third in a season's best of 3:31.63.

He was just ahead of the gangling Kiprop, whose time of 3:33.17 was also a season's best.

After the triumphs and garlands of his Under-20 Dream Mile victory on home soil, when he had reduced his personal best to 3:56.29, he experienced the other side of athletics as he finished more than 30 metres adrift of the field.

However, his dogged finish saw him rewarded with another significant personal best of 3:39.92, well inside his previous mark of 3:42.44.

"I am very happy," said Cheruiyot.

"I go back to Kenya now and prepare for the World Championship trials.

"I will be really happy if I can make it to London, this was good preparation for this."

The 21-year-old former decathlete had warned after that effort that he might find the batteries a little flat for the follow-up, but he gave an indication of his attitude as he boarded the bus to the stadium, responding to a question by announcing: "I am always trying my best".

Once again his best was good enough to win, as he reproduced the aggressive tactics he had employed at the Bislett Stadium, running in the same position, lane seven, and closing up the stagger on the man outside him - Britain's Jack Green - by the start of the back straight.

He maintained his form all the way down the home straight before crossing in 48.82.

Rasmus Magi of Estonia was second in 49.16, 0.02 ahead of Oslo runner-up Yasmani Copello of Turkey, with Green taking fourth in 49.29.

Steven Gardiner of The Bahamas underlined his status as one of the sport's rising talents as he won the men's 400m with ease in 44.58, having time to raise both hands as he crossed the line in almost leisurely fashion.

The 6 foot 5 inches tall athlete had been chased down the final straight by Oslo's winner, Baboloki Thebe of Botswana, who was second in 44.99 ahead of Belgium's Kevin Borlee, who recorded a season’s best of 45.47.

"I thought my performance was really good; it was a bit windy on the backstretch but overall I ran a good race," said Gardiner.

"My plans for the rest of the season are to stay healthly and go for the win."

Russian athlete Mariya Lasitskene underlined her position as overwhelming favourite to retain the world high jump title that she won in Beijing two years ago as she produced her fifth jump of 2.00m or over.

Lasitskene was competing under a neutral banner due to Russia's suspension amid doping allegations.

Croatia's queen of the discus, Sandra Perkovic, was temporarily displaced from her throne by Cuba’s Yaimi Perez, whose season's best effort of 67.92m in the first round proved enough to earn maximum points on the Road To The Final as the double Olympic champion and five-times Diamond League winner - already assured of a place in this season’s finale - had to settle for second on a frustrating day.

She registered fouls in four of her six attempts, of which the best was her fifth round effort of 67.75, a centimetre more than third-place Nadine Muller of Germany.

Daniel Stahl produced his fifth 68m plus discus throw of the season in an effort to produce a home victory for an Olympic Stadium crowd basking in brilliant sunshine, but fell marginally short as Jamaica's Fedrick Dacres, who leads this season’s world rankings with 68.88, won with a fourth round effort of 68.36.