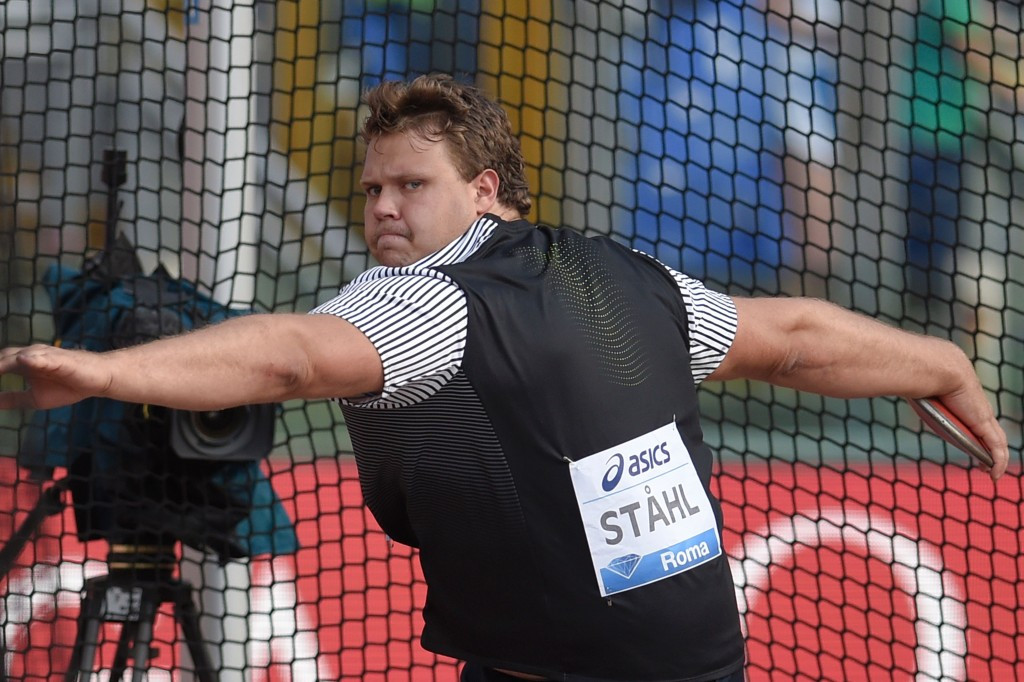 After the home heroics of Norway's athletes on Thursday (June 15), Sweden's track and field performers will step up here tomorrow in an effort to provide a similar flourish at the sixth International Association of Athletics Federations (IAAF) Diamond League meeting of the season.

Discus thrower Daniel Stahl will lead the home challengers with Sweden aiming to replicate the success of the Norwegians, who excelled at the Bislett Games Diamond League event on Thursday (June 15).

Stahl looms large in the posters that have been publicising the BAUHAUS-galan Games meeting in Stockholm - and he translated that standing into real life in Oslo as he dominated the world's leading performers in his field.

The 24-year-old Swede, top of last year's world rankings with 68.72 metres in front of Germany’s Olympic champion Christoph Harting, won maximum points in the Bislett Stadium with a best effort of 68.06 metes that left him ahead of Jamaica's Fedrick Dacres, leader of this season’s rankings with 68.88m, and Belgium's Philip Milanov, who managed 66.39m.

"My goal is 70 metres on Sunday," said Stahl, who left Bislett Stadium by car immediately after the meeting and arrived at his home in Stockholm at 5.30am in order to fit in two training sessions yesterday.

"I have the power and if I find the timing it could definitely happen.

"A goal is also to throw further than 68.40 which was Ricky Bruch's world record set in Stockholm in 1972."

Neither Christoph Harting nor his elder brother Robert, the London 2012 winner, were on form in Oslo, and Poland's world champion Piotr Malachowski was also out of sorts, finishing seventh with a best of 63.70m.

The home hero of Oslo, Karsten Warholm, will be hoping he still has some energy left in his legs after his supreme effort in defeating a 400 metres hurdles field that included the Olympic champion, Kerron Clement of the United States, where he lowered his Norwegian record to 48.25sec.

Clement, whose slide to last place in the final straight clearly betokened that all was not well, is not in Stockholm, but Yasmani Copello, the Turkish athlete who chased Warholm home, is, and in place of a US Olympic gold medallist there is a US former world champion Bershawn Jackson.

"I don't usually look too much at the starting lists, because everyone has to run their own race," Warholm said at a pre-event press conference here.

"It's a standard answer I know, but that's the way it is.

"I know that if I run to my best I can be up there fighting with the best of them.

"I wanted to stop when I got to the turn in Oslo, but the support kept me going.

"I just hope the crowd tomorrow will be somewhere near that.

The women's 800m that concludes the evening's programme offers home runner Lovisa Lindh the opportunity to break the Swedish record on home soil, having run a personal best of 1min 59.23sec in Oslo as she chased home the three Rio 2016 medallists.

That was only 0.03 seconds slower than the record set in 2013 by Sweden's adopted Ethiopian runner Abebe Aregawi.

The 25-year-old Swede, European bronze medallist last year, faces only one of the Rio 2016 trio here - silver medallist Francine Niyonsaba of Burundi - although the field also contains the three women who finished behind her in Oslo - Canada's world silver medallist Melissa Bishop, Iceland's Anita Hinriksdottir and Rose Almanza of Cuba.

After two rounds of the men's 110m hurdles there is already a leading group forming, and the gap between them and those below them could widen if Spain's Olympic silver medallist Orlando Ortega and Russia's world champion Sergey Shubenkov, competing under a neutral banner, take the opportunity to consolidate their position in the top three.

"After so long out of the international scene, I felt like a rookie in Eugene and Rome," said Shubenkov today.

"But I am heading in the right direction - I just need to get my rhythm working properly."

After an outstanding indoor season in which he led the world rankings with 7.43 and won the European indoor title in Belgrade, Britain's Andrew Pozzi is ready to make his presence felt among the world's elite outdoor hurdlers.

Shubenkov's compatriot and fellow world champion Mariya Lasitskene has dominated the women's high jump so far this season with victories in Eugene and Rome.

She has already managed four jumps of 2.00m or over, setting a personal best of 2.03m at Eugene, and following up in Hengelo last weekend with a superb clearance of 2.04m.

The Russian already looks a strong favourite to relieve Spain's Ruth Beitia of the Diamond Trophy title she has won in the last two years.

Another Russian competing under a neutral banner due to the country's suspension after doping allegations, pole vaulter Anzhelika Sidorova, will be seeking to go one better than she managed in Oslo, where she finished second to Cuba’s Yarisley Silva with a season's best of 4.75m.

Silva, meanwhile, was in characteristically exuberant form and, after winning with a clearance of 4.81m, looks capable of going higher.

Much will depend upon conditions in the Olympic Stadium.

Canada's Andre De Grasse went top of the 100m qualification standings with his win in Oslo in 10.01, and a follow-up victory in Stockholm would surely guarantee him a place in the final.

It would be a welcome bonus for the 22-year-old Olympic 100m bronze medallist if he could secure the 10th sub-10 clocking of his career.

"I came pretty close in Oslo," he said today, later conceding under only moderate media pressure that, although the 200m - at which he took Olympic silver behind Usain Bolt - is currently his best event,

The men's long jump will offer home favourite Michel Torneus, a model of consistency with medals in European or global events for the last six years, the opportunity to rouse the home crowd with his characteristic competitiveness as he takes on a field that also includes Australia's world silver medallist Fabrice Lapierre and the in-form South African pair of Luvo Manyonga, who has already jumped 8.65m this season, and Rushwal Samaai, who has a 2017 best of 8.49m.

Many of the men's 1500m will doubtless still be getting over the shock of having been beaten by Jake Wightman in Oslo.

The Briton will not be in Stockholm but the field will be supplemented in the strongest possible fashion with the addition of Kenya's triple world and former Olympic champion Asbel Kiprop.