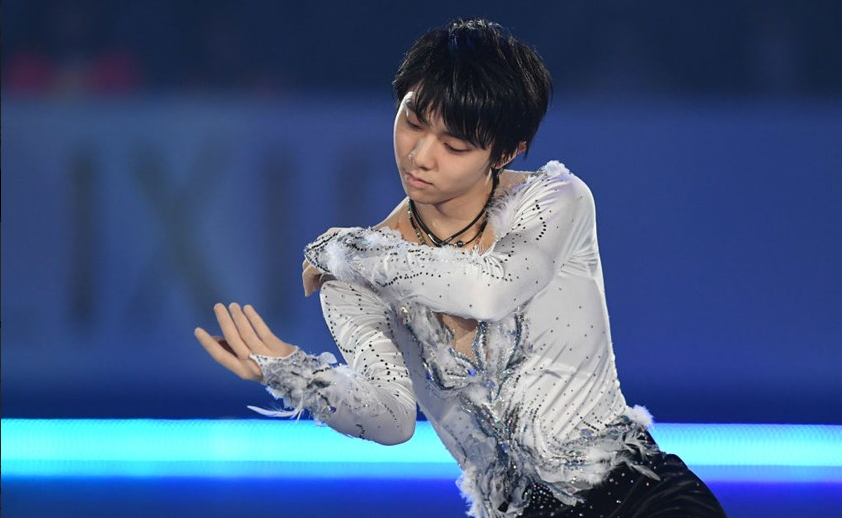 Reigning world and Olympic champion Yuzuru Hanyu of Japan is among the leading athletes on the entry lists for the 2017-2018 International Skating Union (ISU) Grand Prix of Figure Skating Series, scheduled to begin with the Rostelecom Cup in Moscow from October 20 to 22.

Hanyu is due start a season which will climax at the Winter Olympics in Pyeongchang next February in Russia’s capital, where he will face Four Continents champion Nathan Chen of the United States.

Two-time world champion Evgenia Medvedeva of Russia will meet five-time European champion Carolina Kostner of Italy, set to return to the Grand Prix Series after not competing for the past three seasons.

Kostner returned to competition last season after serving a 21-month ban for being complicit in the cover-up of her former boyfriend and doping cheat Alex Schwazer.

The 30-year-old was initially suspended for 16 months in January 2015 for helping Beijing 2008 Olympic race walking champion Schwazer but her ban was later extended to 21 months.

The event in Moscow is expected to feature America's Maia Shibutani and Alex Shibutani, Russia’s Ekaterina Bobrova and Dmitri Soloviev, and European champions Evgenia Tarasova and Vladimir Morozov of Russia.

World junior ice dance champions Rachel Parsons and Michael Parsons of the US will debut at the ISU Grand Prix.

The Rostelecom Cup is due to be followed by Skate Canada in Regina, where action is scheduled to take place from October 27 to 29.

It is headlined by three-time world champion Patrick Chan of Canada and world silver medallists Shoma Uno of Japan, Kaetlyn Osmond of Canada and Aliona Savchenko and Bruno Massot of Germany.

The Cup of China is the third event and is down to take place in Beijing from November 3 to 5.

Two-time world champion Javier Fernandez of Spain and world bronze medallist Boyang Jin of China are due to participate as well.

Reigning world junior champions Alina Zagitova of Russia and Vincent Zhou of the US will debut at the ISU Grand Prix.

The series is then scheduled to continue with the NHK Trophy in Japanese city Osaka from November 10 to 12.

Hanyu, Chan, Medvedeva and 2015 world silver medallist Satoko Miyahara of Japan are all set to compete, while the pairs event includes Sui and Han and Sochi 2014 Olympic silver medallists Ksenia Stolbova and Fedor Klimov of Russia, and Virtue and Moir lead the dance event.

The circuit is then due to move back to Europe for the Internationaux de France in Grenoble from November 17 to 19.

The event is headlined by Uno, Fernandez, Osmond, 2015 world champion Elizaveta Tuktamysheva of Russia, Tarasova and Morozov, and Papadakis and Cizeron.

The last spots for the ISU Grand Prix of Figure Skating Final are set be decided at Skate America in Lake Placid from November 24 to 26.

The main contenders include Jin, Chen, 2016 world silver medallist Ashley Wagner of the US, Daleman, Duhamel and Radford, Savchenko and Massot, and the Shibutani siblings.

A total of 134 skaters and/or couples from 25 ISU members have been invited and few host country spots are still open.

The number of entries for each event is 12 men, 12 women, eight pairs and 10 ice dance couples.

The top six qualifiers in each discipline will proceed to the Final in Japanese city Nagoya from December 7 to 10.

The skaters are seeded and invited to the six Grand Prix of Figure Skating events based on the results of the 2017 ISU World Figure Skating Championships.

Skaters and couples who have placed one to six in each of the four categories are seeded and assigned to two events.

Skaters with a top-24-high season's best score, as well as those placed in the top 24 of the world standings, can also be invited.

In order for a skater and/or couple to be eligible to compete at a Grand Prix event, a minimum total score or minimum technical score must have been achieved in the previous or current season in an ISU event.