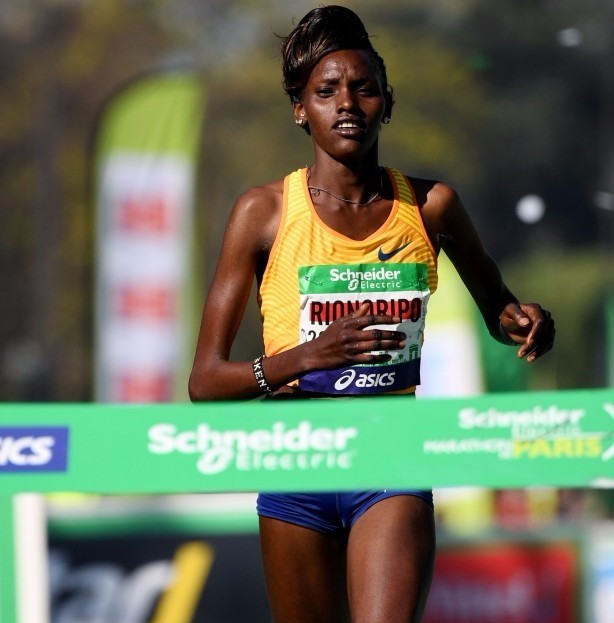 Three training partners of banned Olympic marathon champion Jemima Sumgong have been suspended from competitions "until investigations into doping allegations are completed", it has been reported.

According to the Daily Nation newspaper in Nairobi, the trio banned include Paris Marathon champion Purity Rionoripo and Sarah Chepchirchir, winners of this year's Paris and Tokyo Marathon races.

They have each been suspended by their management company Rosa Associati Company.

It is not yet clear if the three have been directly implicated in a failed test.

Sumgong was banned after failing for blood booster erythropoietin (EPO) at an out-of-competition test in April.

She faces a four-year ban from competition.

Federico Rosa, head of the Italian based company, told the Daily Nation that the Anti-Doping Agency of Kenya are assisting them in their investigation into other members of the training group.

"Yes, we have suspended some of our athletes and the Government of Kenya is helping us with investigations," he told the newspaper.

Rosa was temporarily suspended by Athletics Kenya in 2015 after being accused of abetting doping only for the case to be dropped by the High Court in Nairobi.

Another leading member of the team, Mathew Kisorio, was suspended for two years in 2012 after failing for banned steroids.

He later told a German television documentary that "everyone told me that I wasn’t the only one" and that "when you run, you run so smooth".

Chepchirchir ran a time of 2 hours 19min 47sec when winning the Tokyo Marathon in February, a course record by nearly two minutes.

She claims that she does not know why she has been suspended.

Rionoripo's time at the Paris Marathon was 2:20:55, also a course record.

Athletics Kenya have also not yet revealed the reason for the suspensions.

"Federico talked to one of us on [the] phone but we have summoned him to come to Nairobi so that he can explain in detail," the governing body's deputy-president in charge of competitions Paul Mutwii said.

"We really don’t want to commit ourselves to what we don’t know and the happenings at Rosa Associati.

"We want answers from Rosa on why they have suspended athletes and if at all they have evidence involving some failed dope tests."

He subsequently denied having made such a claim,

Around 40 athletes from Kenya have tested positive for banned drugs since 2012, including three-times Boston Marathon winner Rita Jeptoo, who failed for EPO in 2014.

A new law criminalising doping has been introduced in the country, which was declared non-compliant by the World Anti-Doping Agency (WADA) in May to put their participation at Rio 2016 in jeopardy.

WADA said Kenya were in breach of anti-doping rules before the situation was resolved in time for the Olympics.