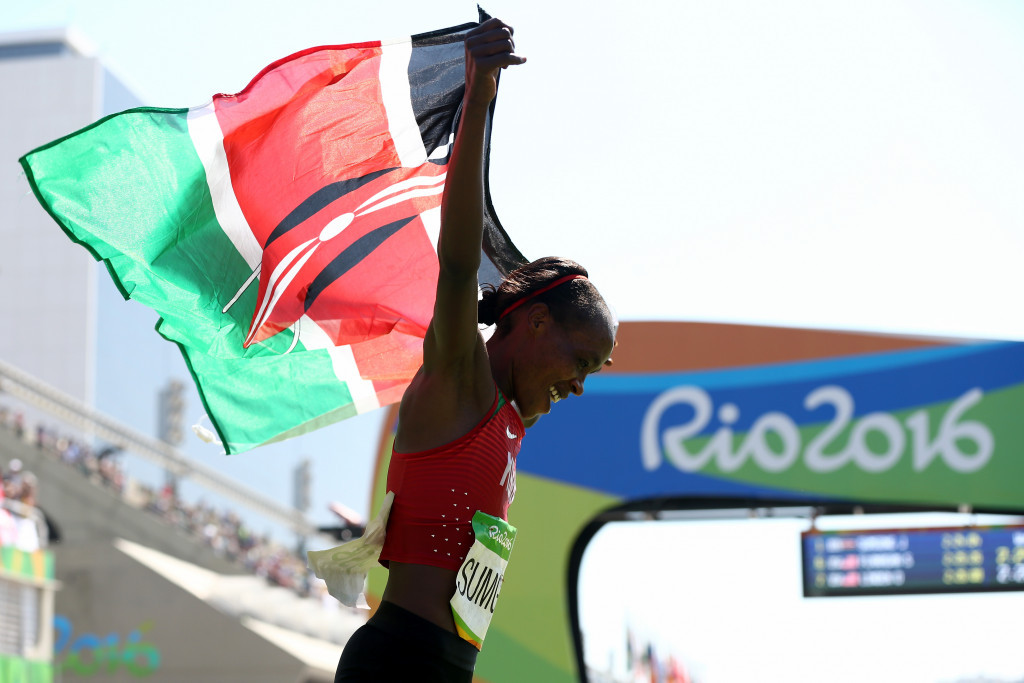 Team-mates of Kenya's Olympic marathon champion Jemima Sumgong have condemned her after she failed an out-of-competition drugs test.

Sumgong was supposed to run at the Virgin Money London Marathon on Sunday (April 23), where she would have been defending the title she won 12 months ago.

Instead, she is facing a four-year suspension after testing positive for the banned substance erythropoietin (EPO), a hormone which boosts red blood cells.

The International Association of Athletics Federations (IAAF) revealed earlier this month that a case has been opened against the runner, who triumphed in the women’s marathon at Rio 2016 in a time of 2 hours 24min 04sec.

Several leading runners from Kenya are due to compete in this year's London Marathon but there are increasing suspicions over the performances of runners from that country following a number of high-profile doping cases.

"For me it really embarrasses the sport," she said.

"I am really ashamed.

"I am ashamed because we are losing top athletes like that."

Sumgong's B-test still has to be analysed so she is technically not guilty of a doping offence.

But there was no sympathy for her among her countrywomen.

"I never ever imagined that it would happen," said the three-time New York City Marathon winner Mary Keitany.

“Athletes are talented by nature.

"Why would you add something extra, other than training?

“I think all of Kenya now is in the spotlight.

"My message is don't try to cheat.

I don’t want to be in that group of those who are trying to use a shortcut."

Vivian Cheruiyot, the Olympic 5,000m champion, urged Sumgong to cooperate with the authorities and help them uncover who helped her dope.

"She knows that she went for that injection [for EPO]," she said.

"She can't say she didn't know.

"We love sport and we love clean sport.

"I remember [her winning] in Rio and that everyone was happy for Kenya.

"If she is using something it is very disappointing."

The race here on Sunday is also due to feature Ethopia's Mare Dibaba, the bronze medallist at Rio 2016 behind Sumgong.

"It’s very bad and it falls very hard on me to know that the Olympic marathon champion may have doped," she said.

Another top Kenyan female runner, Rita Jeptoo, a three-time winner of the Boston Marathon, was banned in 2016 for four-years after also testing positive for EPO.

The scheme was established in conjunction with the IAAF with an aim of requiring more than 150 runners to submit to out-of-competition testing a minimum of six times a year.

A Series X winner will not now be announced until the investigation into Sumgong is completed.

"We are at the forefront of ensuring integrity in our sport," Hugh Brasher, the race director of the London Marathon, told insidethegames here today.

"It's incredibly disappointing that I heard of the positive test of last year's champion.

"If there is a positive out of the disappointment it is that the testing was paid for by an organisation that we are part of.

"We are determined to stamp out any cheating.

"We will test people again and again."