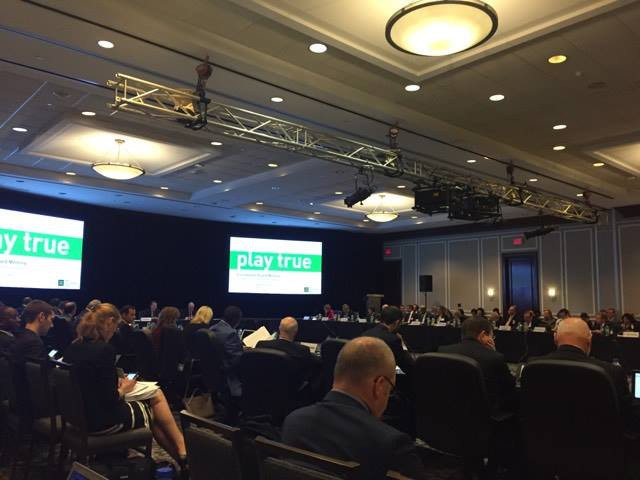 A proposal to expedite the approval of new sanctioning rules was approved at the World Anti-Doping Agency (WADA) Foundation Board meeting here today.

The 38-member ruling body agreed that the regulations, including a graded sanctioning system which will allow groups such as National Olympic Committees and International Federations to be punished for WADA Code violations in a similar way to athletes, should be fast-tracked.

They are set to be put forward to a consultation process beginning on June 1 and a formal vote on their implementation could take place as early as the next Foundation Board meeting in Seoul on November 16.

It is then hoped that, providing they are given the green light, that the updated regulations would come into effect in January.

The initial plan was to wait until revisions to the WADA Code come into force in 2021, but Jonathan Taylor, the head of the Compliance Review Committee (CRC), said here today that would be "too long to wait".

Taylor also admitted their proposed timeline was "ambitious" but it was "there for a reason".

WADA had called on this be pushed through with a great degree of urgency.

"This is not about short-circuiting consultation," Taylor, a partner at international law firm Bird & Bird, said.

"We are committed to the process and to giving a proper opportunity to comment and consider."

Although the recommendations from the CRC were approved, there was scepticism among the present members of the International Olympic Committee (IOC).

Patrick Baumann, the head of the IOC Evaluation Commission for the 2024 Games and the President of the Global Association of International Sports Federations, warned that consensus should prevail over urgency.

The Swiss also reiterated the IOC stance that WADA should not be given sanctioning power.

"We would seek to ensure that the sanctioning power is dedicated to an independent body," he said.

"We would feel that this should be built into the review of the Code."

There was widespread backing, however, from WADA Athlete Committee chairperson Beckie Scott and Government Ministers, such as New Zealand Sports Minister Jonathan Coleman.

A system consisting of three differing levels of offences has been put forward.

A second medium level consits of more serious problems with anti-doping procedures such as testing or educational schemes.

The most serious faults such as the Government interference and direct manipulation of the system seen alleged in Russia in recent years make up the third group - the punishments for which include countries being banned from the Olympic Games and World Championships.

Sanctions will rise from warnings to escalating fines to, in the most serious cases, a suspension of athletes' eligibility to compete in a specific event.

This marks a departure from the current system in which WADA can make recommendations but has no specific sanctioning power.

It is "aimed at supporting whistleblowers through an effective framework including legal advice and financial support", according to WADA.

Gunter Younger, WADA's director of intelligence and investigations, provided an update on the progress of their Speak Up! whistleblower programme, approved at the last meeting in November.

At @WADA_AMA Foundation Board, to give a progress report from the Governance Working Group, on our efforts to strengthen sport anti-doping ? pic.twitter.com/7s0gSLKllX

The Foundation Board were also given an update on the governance working group's progress by Akaash Maharaj.

The Committee criticised the current Foundation Board and Executive Committee structure, claiming the functions of governance, management oversight and operations were too confusing.

They also called for the ruling Foundation Board to be expanded to 50 members, while reiterating their belief that the WADA President and vice-president should be "neutral".

The Governance Review Committee staged its first meeting in March and will hold its next meeting in July before reporting recommendations in November.

"You can see this is a big task," WADA President Sir Craig Reedie said.

"But it is not as broken as it was before and it is appropriate that we should look at it and see how we can make it better."