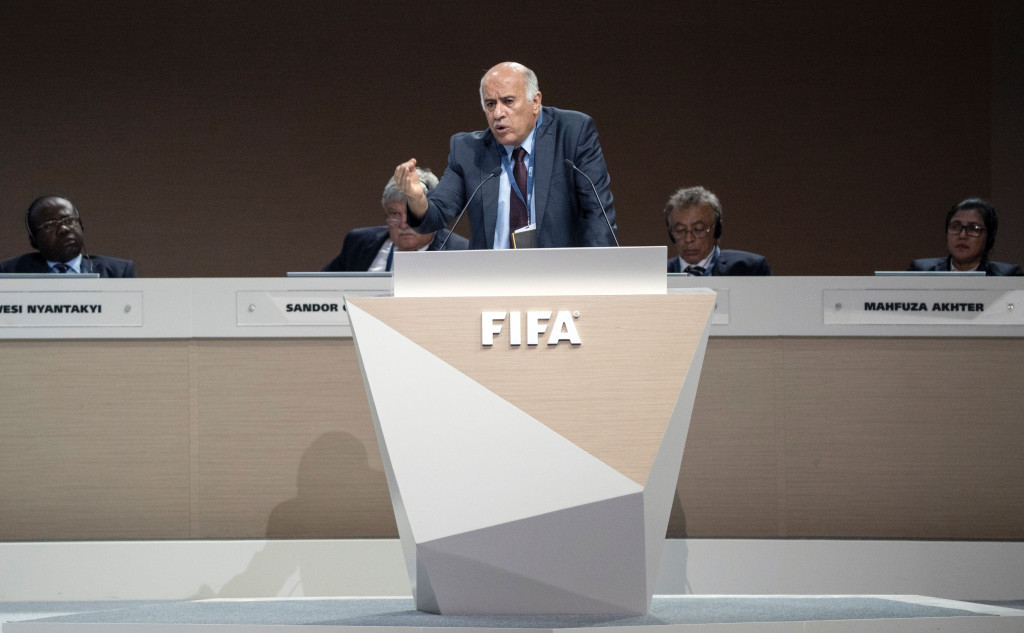 The Palestine Football Association (PFA) has vowed to take FIFA to the Court of Arbitration for Sport (CAS) after they claimed President Gianni Infantino had acted "illegally" by postponing a decision on the country's ongoing feud with Israel until October.

Infantino pushed through a last-ditch motion to take a vote on the dispute between the two countries at the ruling Council's meeting in October and not the full Congress, as had been proposed by PFA President Jibril Rajoub, at FIFA's annual meeting yesterday.

The initial Council proposal had given a deadline of March 2018.

FIFA's Council decided to take the item off the agenda following its meeting on Tuesday (May 9), claiming it would be "premature to take any decision".

The disagreement, which centres on six Israeli teams based in the occupied territory, now looks likely to rumble on even further.

Rajoub was visibly angry at the decision from Infantino, passed by a majority of 73 per cent to 27 per cent, and lamented the continued delays in the resolution process.

Infantino told the membership that this had occurred because the report from FIFA Monitoring Committee chairman Tokyo Sexwale, recommending Israel be given six months to stop the teams playing in the occupied territories, was not yet "fully consolidated".

In a statement, the PFA said they "considered the way in which our proposal was overthrown by Mr Infantino illegal, and an additional violation of the FIFA Statutes and standing orders of the Congress".

"We are disappointed that FIFA has decided to allow political pressure to win over the FIFA statutes," the statement said.

"Mr Infantino has set a precedent where governments decide the agenda for a FIFA Congress, and violations of the statutes and misuse of its legal devices become so common in a way that encourages those who allow football to be used as a tool to normalise oppression.

"We will pursue the matter in the CAS because we consider the way in which our proposal was overthrown by Mr Infantino illegal, and an additional violation of the FIFA Statutes and standing orders of the Congress."

During the Congress, Rajoub gave an impassioned address where he repeatedly called for FIFA's membership to "end the suffering" of Palestinian footballers.

IFA President Ofer Eini responded to the speech from Rajoub and proposed holding a "match of peace" between the two countries, with the money raised going towards a football school in the troubled region.

"I do not intend to give a hate speech in return," he said, labelling Rajoub's address as "political from start to finish".

Rajoub then became even more animated by Infantino's decision, with a lawyer for the PFA calling the move "unconstitutional".

Others claimed it went against FIFA's own statutes, while Human Rights Watch said it "means FIFA will continue sponsoring games on stolen land, contrary to its statutes and human rights responsibilities".

Israel's Prime Minister Benjamin Netanyahu, who phoned Infantino in a bid to get the item removed from the Congress agenda, declared in a statement that it was an "important achievement".

"We won another victory in Israel’s battle for its international standing," he said.

"We thwarted an attempt to undermine Israel’s standing in FIFA."

Palestine say the fact that the teams, playing in the settlements of Kiryat Arba, Givat Ze’ev, Ma’aleh Adumim, Ariel, Oranit and Tomer, are in territory which they eventually believe will be within the borders of a future Palestinian state goes against FIFA statutes.

Israel disputes this and have accused Rajoub of manipulating the situation to further his political interests.