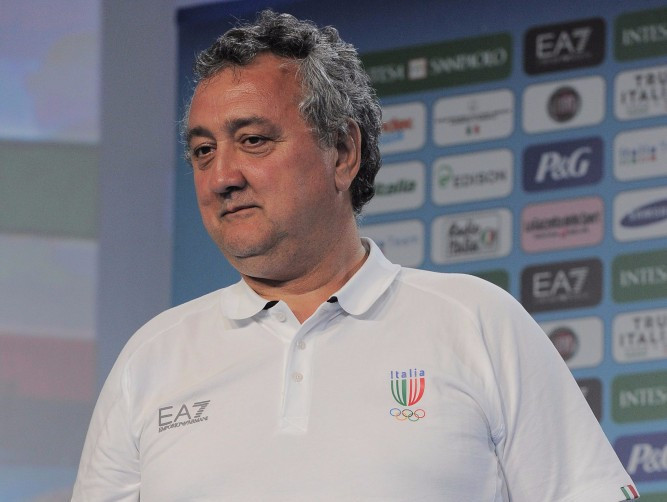 Writing in a strongly worded three-page letter distributed among European Federations, the Italian claimed he is taking the "bold step of challenging the incumbent" in order to introduce much needed change at the helm of the sport.

He is also the sole contender for the position of European FINA vice-president, a back-up plan should he fail to defeat Maglione.

insidethegames has seen the full list of candidates for the FINA ruling Bureau, despite the governing body claiming they will not officially announce them until May 22.

Kuwait's Husain Al-Musallam, currently implicated in an Olympic Council of Asia Ethics Commission probe after being identified as a co-conspirator in a United States Department of Justice bribery case connected to their investigation into FIFA, is the sole contender for the position of first vice-president.

He is also the only candidate for Asian vice-president.

Al-Musallam has denied all wrongdoing but FINA have claimed they will "monitor the situation" and "take all measures deemed necessary".

South Africa's Sam Ramsamy is the African candidate and is also standing unopposed for second vice-president.

Barelli is currently also serving as the honorary secretary of FINA.

It was decided in 2015, however, this position will be scrapped after this year's elections.

This is one of many grievances raised by Barelli in his letter.

Barelli has already taken FINA to the Court of Arbitration for Sport over a number of issues.

"As you well know all our long-standing complaints with regard to FINA and its unethical behaviour have been completely ignored," he said in the letter on LEN-headed notepaper and obtained by insidethegames.

"It is precisely for this that I have decided to present my candidacy to the position of President at the upcoming FINA Congress in Budapest.

"I am aware that is not an easy task.

"Nonetheless, I feel it is the only way to make the world aware of the current untenable situation we are facing.

"We cannot continue to silently accept things that are clearly wrong or be bullied any further."

The 62-year-old Senator from Rome, who represented Italy in the Olympics at Munich 1972 and Montreal 1976, has listed a number of grievances.

These include LEN's position within FINA and leadership at the world governing body, along with governance and the competition programme.

Barelli, a World Championship bronze medallist in the 4x100 metres in 1975, claimed the decision to abolish the honorary secretary was "sneaky".

Barelli is also critical about the increase of representatives from Africa and Asia on the FINA Bureau.

"Considering the results of our athletes (50 per cent of medals in Kazan 2015) and Olympic Games, Europe must be represented and have a much more prominent role, and not an ever decreasing one," he wrote.

A European has not led FINA since Yugoslavia's Ante Lambaša ended his four-year term in 1984.

He was followed by United States' Robert Helmick from 1984 to 1988 and Algeria's Mustapha Ladfaoui from then until Maglione took over in 2009.

Barelli accused FINA's non-European leaders of attempting to gain control "not only of political power...but even more importantly, over the economic one also".

He added: "As already happened with other International Federations (e.g. FIFA these days), perhaps there are people more interested to the power and money of FINA rather than to the wellbeing of the athletes and National Federations."

In the section on governance, he refers to the "outrageous conflict of interest  of a FINA Bureau member playing the double role as a member of the FINA Executive and, quite incredibly, that of director of a FINA commercial partner".

This is a clear reference to Neuberger, a director of Lausanne-based TSE Consulting, who work for FINA.

TSE also worked for Royal Dutch Swimming Federation President Erik van Heijningen before he lost by a 50-vote margin to Barelli in the vote for the LEN President last year.

Neuberger has claimed he is not involved in TSE's work with FINA.

The matter, though, is believed to be at the centre of one of Barelli's cases at CAS.

In his letter, Barelli also claimed "FINA's leadership taking decisions on ethical matters, and deciding at their own discretion whether to involve the Ethics Panel or not to analyse and evaluate people and fact".

Two FINA Bureau members - Brazil's Coaracy Nunes and Kenya's Ben Ekumbo - have retained their positions, despite being implicated in corruption investigations in their respective countries.

Nunes and Ekumbo are not standing for re-election at the Congress.

Barelli also claimed that FINA events have "negatively affected the LEN calendar, limiting the historical collaboration which always existed among our member federations".

"I am convinced LEN is part of FINA, with which it has always collaborated with passion, and always will," he wrote.

"Change for the sake of change is useless.

"Change to make a real difference is what I want to achieve with you."

insidethegames has been told that Africa, the Americas, Asia and Oceania all plan to back 81-year-old Maglione in the election.

The Uruguayan was permitted to run for a third term after a FINA decision in 2015 to abolish a statute requirement for all members of its ruling Bureau to be under 80.

Barelli is unlikely to receive unanimous backing in Europe.

As well as van Heijningen's The Netherlands, another country likely to oppose him is Russia.

Both van Heijningen and Russian Swimming Federation President Vladimir Salnikov are standing for re-election to the FINA Bureau, despite failing to be nominated by LEN.

Asian Swimming Federation-backed Zhou Jilong of China and Taha Al-Kishry of Oman are set to be challenged for two Asian Bureau positions by Iran's Mohsen Rezvani and Qatar's Khaleel Al-Jaber.

Thailand's Pipat Paniangvait is the only candidate for honorary treasurer, a position he already holds.