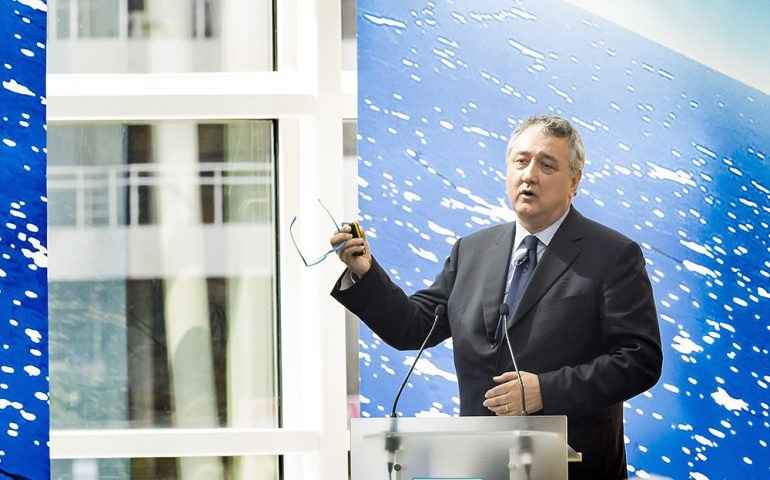 Italy's Paolo Barelli has been re-elected President of the European Swimming Federation (LEN) by a thumping 50-vote margin at a heated Elective Congress here today.

Barelli, the Italian Swimming Federation boss who was first elected to his LEN post in 2012, won with 77 of the 104 votes cast.

Van Heijningen was also voted off his vice-presidential position on the LEN Bureau in controversial fashion after an associate of Barelli circulated a "preferred list" of candidates beforehand - all of whom were chosen.

Barelli has run a behind-closed-doors campaign in which he privately circulated a manifesto only days before the election and had refused to answer questions on his intentions beforehand.

But the 61-year-old Senator from Rome, a former Olympic swimmer who competed at Munich 1972 and Montreal 1976 and won a 4x100 metres freestyle relay bronze medal at the 1975 World Championships in Cali, used his Presidential address at the beginning of today's meeting to emphasise the financial improvement made under his watch.

Maximising commercial and broadcasting exposure was cited as another priority for the next four years, along with improved "communication and transparency".

Delegates from Monaco, Iceland - who headed the influential Nordic bloc - and Georgia all stood up to offer their congratulations and support following this address in a reflection of the way the wind was blowing.

Van Heijningen, a Dutch lawyer and former water polo player, has criticised the running of the organisation and called for "a leader who understands the global needs and challenges of our sport".

But he was noticeably more restrained in his 10 minute address given to delegates today, complimenting Barelli and vowing to give him the position of honorary President should he prove successful.

Today's result shows the Federations appreciate the good work he has done since inheriting a "mess" four years ago, the Italian told insidethegames afterwards.

He claimed that the closed ballot system - which the LEN Bureau voted to use at a meeting yesterday - was evidence of an open and transparent election, which was presided over by representatives of the International Swimming Federation (FINA) Ethics Committee.

Others claimed he had "listened to what the Federations want", before expressing their hope that he continues to do so and fulfills his promises.

Van Heijningen, however, disagreed afterwards in a return to his critical stance, dismissing the Congress as a "good news show" and claiming that Barelli's lip service to openness and transparency contained gestures lifted from his own manifesto.

"I'm very disappointed because we took this venture to improve LEN, but in the end you can see the the power he [Barelli] has is enormous, and that democracy in sports organisations is not fully so," he told insidethegames.

"People are not free to choose, and it is too much about positions.

Barelli has faced fraud allegations in Italy after claims a sum of $1 million (£720,000/€916,000) allocated to the national governing body to be spent on the pool used for the 2009 World Championships in Rome was unaccounted for.

One issue not mentioned by either Presidential candidate in their manifestos or speeches today was anti-doping, something particularly significant due to the widely reported concerns and suspicions about widespread illegal drug use in swimming - including in Europe.

Barelli has been criticised for his lack of firm action, particularly last month when Russia's Natalia Lovtsova, a London 2012 Olympian who has served two doping bans in her career, was invited to an LEN-organised meet in Lignano last week.

"It is easy to say too much [about doping]," the Italian said when asked about this by insidethegames.

"It is the job of FINA, the World Anti-Doping Agency (WADA) and national bodies to take action, not LEN - we can only inform people about the dangers.

"But doping is a problem.

"We will undertake a big social promotional effort to show the importance of clean sport."

Van Heijningen, a former head of the FINA Anti-Doping Panel, also failed to mention doping in his manifesto or speech today, but has claimed that changes must be made to avoid the issue "killing our sport".

The Dutchman had been criticised for his decision to employ TSE Consulting, a Lausanne-based consultancy who have also worked for FINA and whose directors include FINA vice-president Dale Neuberger.

Some alleged that this was a conflict of interest, although TSE insisted Neuberger was playing no role in the campaign.

But a Congress which had begun in the spirit of cordiality became increasingly bad tempered after those close to Barelli circulated the "preferred list" of vice-presidents and other Bureau members, in which both van Heijningen and his Russian ally Vladimir Salnikov were omitted.

Many figures who had been contenders for these positions in official nominations circulated to members beforehand were ultimately not on the ballot paper in the election, despite no withdrawals having been announced.

Every "preferred" appointment of Barelli was chosen after an arduous process in which over 1,000 votes were counted manually.

A list of nine new Bureau members was headed by Pia Holmen of Denmark and Jerzy Kowalski of Poland, with 86 and 85 votes respectively.

The preferred list, which was colour coded in the same way as the actual ballot paper, is a "normal part of political lobbying", Sparkes told insidethegames afterwards, also claiming "it was perfectly normal" for candidates to withdraw from running for a certain position before the election.

Van Heijningen received just 39 votes, with Salnikov gaining even less, meaning there is no longer a Dutch or a Russian representative in the panel.

Sparkes, Diathesopoulos and Gyarfis were also elected as the three LEN-representatives on the FINA Bureau.