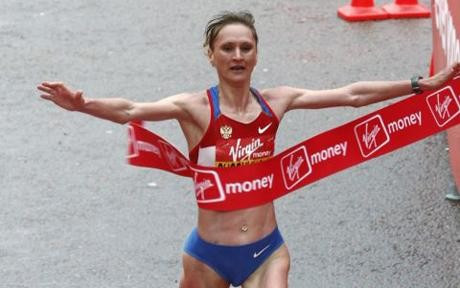 London Marathon chief executive Nick Bitel has vowed not to give up on their pursuit of Liliya Shobukhova for prize and appearance money the Russian has been ordered to return after she was banned for drugs.

He admitted, however, there was no guarantee they would be successful.

Shobukhova won the 2010 London Marathon before she was given a 38-month suspension from the sport after her biological passport showed "abnormal haematological curves".

The London Marathon then launched legal action in an attempt to recoup some of the money given to Shobukhova and the British High Court ruled in their favour last July.

The London Marathon are now trying to get the judgement served in Beloretsk, Shobukhova's home city in the Republic of Bashkortostan, more than 1,000 miles away from Moscow.

"It takes a great deal of time," Bitel, a leading sports lawyer with Kerman & Co in London, told insidethegames today.

"We are pushing it as fast as we can.

"But, even if we get a court judgement [in Russia], there is no guarantee we will get any money."

If they are successful, the London Marathon plans to redistribute the money to other runners who competed in those editions of the race that Shobukhova competed in.

Under a new scheme introduced in 2016, the winners of the London Marathon now have to wait five years to receive their full prize money after a new payment plan was introduced to deter drugs cheats.

Kenya's Jemima Sumgong, the winner of last year's women's race, has subsequently tested positive for erythropoietin and faces a four-year ban if her B-sample confirms the result of the A.

Shobukhova announced in May 2016 that she would not attempt a comeback in the sport after her ban ended, instead focusing on a career in coaching.

Shobukhova had her ban extended to three years and two months by the International Association of Athletics Federations (IAAF) but the World Anti-Doping Agency granted her a reduction of seven months.

It followed her providing information to the Independent Commission chaired by Canadian lawyer Richard Pound which led to Russia being banned by the IAAF from international competition.

Before her results were erased following her positive drugs test, Shobukhova's personal best of 2 hours 18min 20sec made her the second fastest female marathon runner in history behind Britain's Paula Radcliffe.

"We are determined not to give up on this and will continue to pursue her," Hugh Brasher, race director of the London Marathon, said.