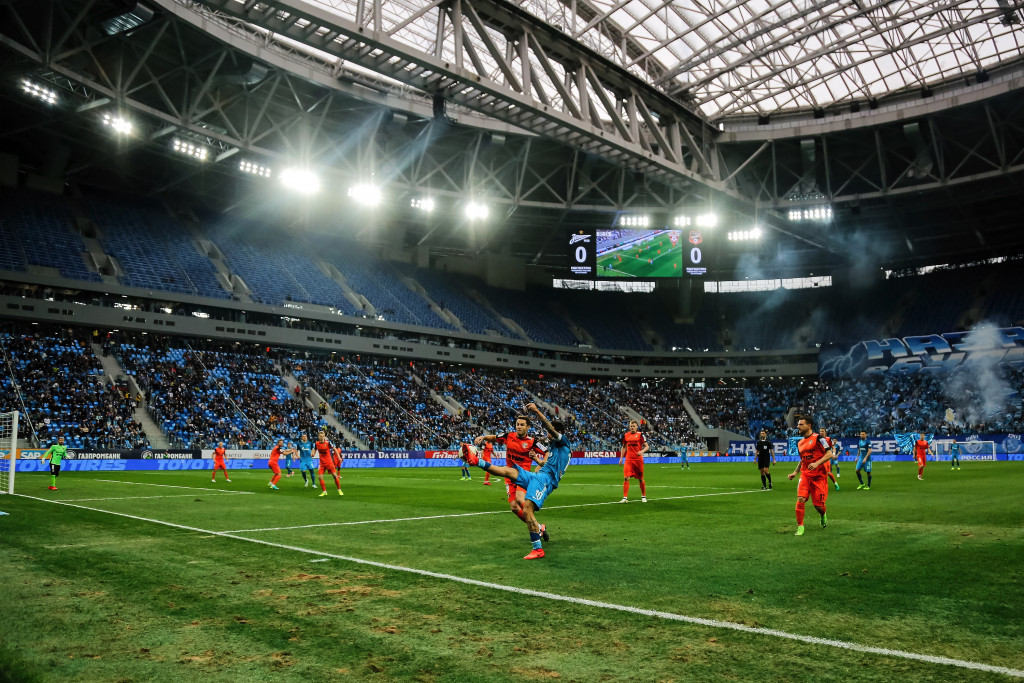 St Petersburg’s Krestovsky Stadium, which is due to host matches during the Russia 2018 FIFA World Cup, has held its first game.

Zenit Saint Petersburg welcomed Ural Yekaterinburg to their new 69,000-seater home, which will host a World Cup semi-final next year and the Confederations Cup final this year.

The Stadium was only partly full for the Russian Premier League encounter, which Zenit won 2-0 as their opponents finished with just eight men, because organisers decided not to open the top tier.

FIFA approved the venue in December 2016 amid several cost and construction timetable overruns.

The Stadium has received criticism for a rising budget that spiralled to a current projection of around ₽41 billion (£567 million/$726 million/€677 million).

A new constructor, Metrostroy, was appointed in last August.

But further setbacks occurred in November when a FIFA Commission discovered that the retractable playing field was unstable, producing vibration levels seven times higher than the accepted level.

FIFA had initially expressed concerns before a solution was found.

The field for the opening game appeared to be in poor condition with large brown patches and chunks of the pitch frequently coming loose.

Last week, Russian Deputy Prime Minister Vitaly Mutko set a deadline of the end of the year for the completion of all World Cup 2018 construction work.

The former Sports Minister and Russian Football Union head was speaking during a visit to Saransk to inspect progress at the 44,000-capacity Mordovia Arena.

He insists there are no excuses despite the economic problems currently plaguing the host nation.

A device hidden in a briefcase triggered an explosion on the metro line on April 3, killing 14 and leaving a further 45 injured.

Saransk is one of 11 cities due to host matches during the 2018 World Cup.

Construction at the Mordovia Arena began in 2010 but is still not yet completely finished.

However, work there and at other venues is considered fairly minor.

This year’s Confederations Cup, where Kazan, Moscow and Sochi will join St Petersburg in hosting matches, is due to take place from June 17 to July 2.