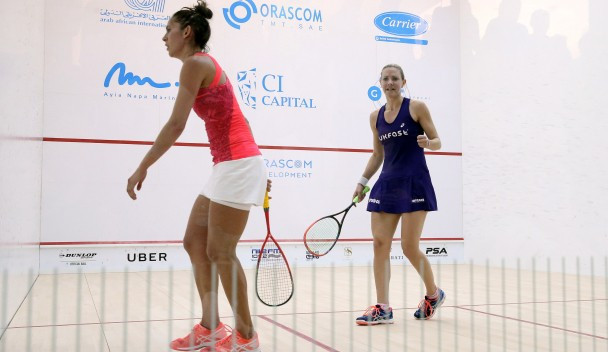 Massaro moved up to world number two for the first time since November 2016 in the latest world rankings after she became the first female English player since Janet Morgan in 1951 to win a second British Open title in March.

Alison Waters, however, was beaten on a mixed day for England's women.

She was beaten by Joshna Chinappa of India in a five game marathon.

Chinappa took the opening game 11-5 before her opponent won the second and third games 11-7 and 11-9 respectively.

The Indian levelled things up by taking the fourth 11-8 before claiming the decisive fifth game 11-9 to advance.

Egypt's Raneem El Welily, seeded third, also secured her place in the last eight with a comfortable 11-5, 11-6, 11-1 win over Olivia Blatchford of the United States.

France's Camille Serme then progressed to the quarter-finals after she overcame Emily Whitlock of England 11-4, 11-6, 11-5.

Second seed Karim Abdel Gawad of Egypt came from a game down to beat Spaniard Borja Golan in this evening's match.

Golan took the first game 11-9 before Gawad restored parity by winning the second 11-1.

Roared on by the home crowd, the Egyptian booked his place in the quarter-finals by winning the second and third games 11-8, 11-5.

He will now face Simon Rösner of Germany, who was also victorious today.

There were also wins for Egypt's Fares Dessouky and Peruvian Diego Elias.

Action in both competitions is scheduled to continue tomorrow with the first round of quarter-final matches.