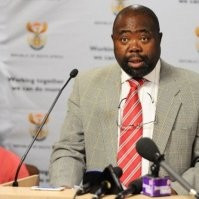 Thembelani Nxesi has become South Africa's Sports Minister replacing Fikile Mbalula after Durban were stripped of its right to host the 2022 Commonwealth Games.

Nxesi's appointment as part of a major Cabinet reshuffle from President Jacob Zumahas been welcomed by the South African Sports Confederation and Olympic Committee (SASCOC).

They claim the new Sports Minister will bring a "fresh approach" to the current sporting challenges in the country.

Mbalula has been moved to the position of Police Minister.

He admitted the nation, which hosted the 2010 FIFA World Cup, was not "in a position to make huge financial commitments given the current competing socio-economic needs and global economic down turn" to stage the Commonwealth Games.

Earlier this month, Commonwealth Games Federation chief executive David Grevemberg said they were left with no choice but to seek an alternative host for their flagship event in 2022.

"We believe Minister Nxesi will adopt a fresh approach in addressing these challenges and we, as SASCOC, are confident of having a good working relationship with the Minister," SASCOC chief executive Tubby Reddy, who performed the same role for Durban 2022, said.

"We hope to meet with the Minister at his earliest convenience to brief him about the state of sport in our country and to address common objectives as contained in the national sports and recreation plan."

I'm reading your messages, Thankyou honorable tweeps. Huge task ahead but nothing can't be achieved working with you. SALUTE 🙏🏾🚨🚓 pic.twitter.com/n3c73abU0N

Mbalula was seen as a controversial figure during his time as Sports Minister - a role he held for nearly seven years having been first appointed in November 2010.

He sent shockwaves through South African sport in 2016 when he banned four Federations from hosting or bidding for major events for a year.

Mbalula, however, recently gave his backing to South Africa's attempt at securing the hosting rights for the 2023 Rugby World Cup, where they are bidding alongside Ireland and France.

Nxesi steps into the Sports Minister role having previously served as the Minister of Public Works.

The 58-year-old was reprimanded by Zuma for his part in the Nkandla scandal, which centred on soaring costs to upgrades on Zuma's private home.

He was Deputy Minister of Rural Development and Land Reform from November 2010 to October 2011.

"We looking forward to working with Minister Nxesi and hope for a long and successful relationship. SASCOC has always had cordial relations with the Department of Sports and Recreation and we want to continue on this path towards meeting the sports needs of our country," SASCOC President Gideon Sam said.

"Minister Nxesi has a valuable role to play in steering us all in the sports movement towards achieving all the goals in the department’s development plan.

"Transformation and resource allocation are the most important issues that we will be engaging with the Minister and his Department."