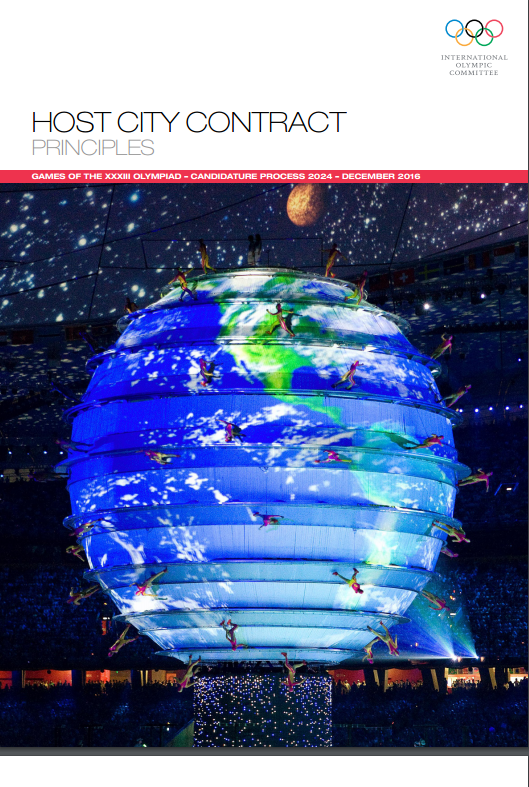 The International Olympic Committee (IOC) has today announced that the incorporation of human rights principles is among the changes it is making to its Host City Contract.

The revised Host City Contract, developed with recommendations from a coalition of leading rights, transparency and athletes' organisations, has been finalised and will first apply to the 2024 Olympic Games.

Paris and Los Angeles are the only two candidates left in the race, with the IOC due to elect the winner during its Session in Peru’s capital Lima in September.

For the first time, the IOC has made specific reference to the United Nations Guiding Principles on Business and Human Rights (UNGP), a set of guidelines for states and companies to prevent, address and remedy human rights abuses committed in business operations.

In September 2015, not specifically mentioning human rights in its Host City Contract for the 2024 Games was described as an "astonishing omission" on the IOC's part and one that did not live up to the expectations created by the Agenda 2020 reform process.

A release sent out by the SRA warned how the IOC must "wake-up" to the human rights impact of its events.

"Time after time, Olympic hosts have gotten away with abusing workers building stadiums, and with crushing critics and media who try to report about abuses," said Minky Worden, director of global initiatives at Human Rights Watch.

"The right to host the Olympics needs to come with the responsibility not to abuse basic human rights."

The IOC said in its new contract that host cities have an obligation to "protect and respect human rights and ensure any violation of human rights is remedied in a manner consistent with international agreements, laws and regulations applicable in the host country".

It goes onto say that this should be done "in a manner consistent with all internationally recognised human rights standards and principles, including the United Nations Guiding Principles on Business and Human Rights, applicable in the host country".

"This is an important step by the IOC for the future," said Sharan Burrow, general secretary of the International Trade Union Confederation.

"Implementing the UN Guiding Principles across all major global sporting events could help break the cycle of human rights abuses, and this example from the IOC should be applied to all such events, starting now."

Following strong criticism of the IOC's failure to criticise Russia for its alleged gay rights abuses before Sochi 2014, a Host City Contact signed by the bidders in the race for the 2022 Winter Games in 2014 specifically prohibited discrimination on the grounds of sexual orientation for the first time.

It also included requirements to allow the media to report freely on the Games and for the building of infrastructure for the event to comply with international labour standards.

This change was praised by human rights groups at the time, but they claimed it must only serve as the first step in a raft of changes, and expressed their displeasure that such changes had not followed.

In August of last year, Brazilian authorities were accused by Amnesty International of missing a "golden opportunity" to use the Olympic Games to improve their commitment to human rights.

It came after at least eight people were reportedly killed in police operations in the city during the Games.

The new Host City Contract also includes a section on countering fraud and corruption related to the organisation of the Olympic Games.

"Based on these principles, the IOC is moving forward by including provisions in the Host City Contract aimed specifically at protecting human rights and countering corruption.

"The organisation of the Olympic Games should always promote and enhance the fundamental values of Olympism.

"This latest step is another reflection of the IOC’s commitment to embedding these values in all aspects of the Olympic Games.”

"We worked closely with SRA and we welcome its input, which is now reflected in the new version of the Host City Contract."