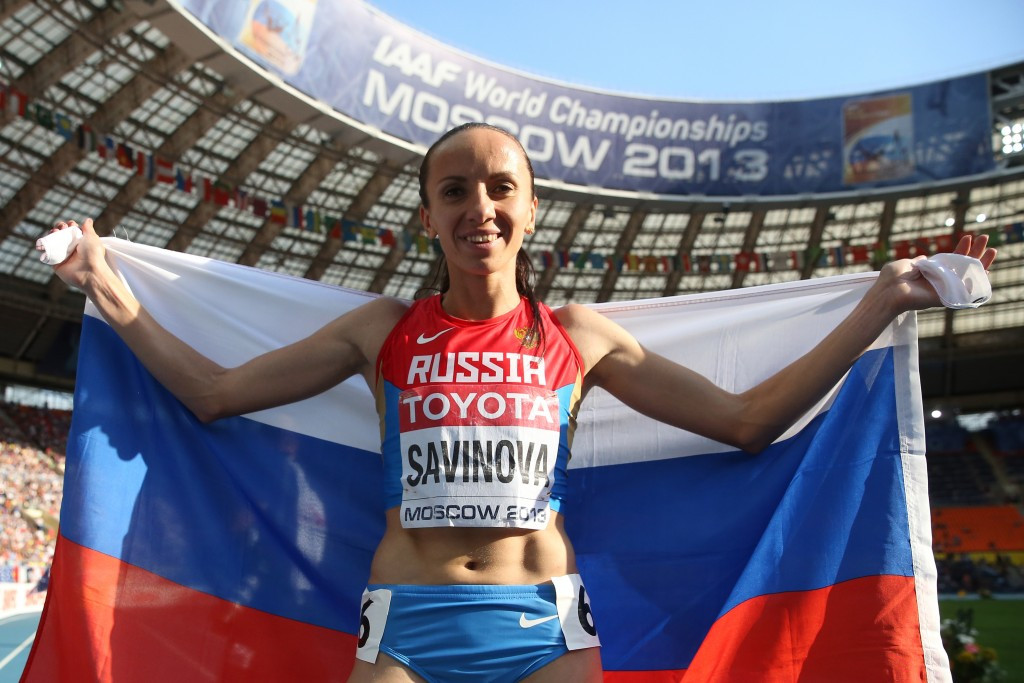 Russian 800 metres runner Mariya Savinova has been stripped of her London 2012 Olympic gold medal and banned for four years for doping by the Court of Arbitration for Sport (CAS).

The 31-year-old will also lose the 800m title she won at the 2011 World Championships in Daegu, as well as her European crown from the previous year, after the CAS said she was "found to have been engaged in using doping" from July 26, 2010 until August 19, 2013.

Caster Semenya of South Africa is line to be upgraded to 800m gold at both London 2012 and the 2011 World Championships in the South Korean city.

Semenya, who won the event at the Rio 2016 Olympics after being cleared to compete in 2010 following a gender test row, is set to be crowned as a double Olympic and world champion.

Savinova's team-mate Ekaterina Poistogova was third in the 800m final in London but is also under investigation for doping.

Pamela Jelima of Kenya could inherit Olympic bronze if she is retrospectively disqualified, with Alysia Montano of the United States set to be pushed up to third.

Another Kenyan, Janeth Jepkosgei, could be upgraded to World Championship silver, with Montano the new recipient of the bronze medal from the event six years ago.

Yvonne Hak of The Netherlands will replace Savinova as 2010 European champion and Britain's Jenny Meadows will be elevated to silver.

She will be able to appeal within the next 45 days, however, and the case is not definitively closed because it is a first instance CAS decision, due to the current suspension of the Russian Athletics Federation (RusAF).

It was brought by the International Association of Athletics Federations (IAAF) against the athlete based upon her biological passport, which CAS was deciding upon.

"On the basis of clear evidence, including the evidence derived from her biological passport (ABP), Mariya Savinova-Farnosova is found to have been engaged in using doping from 26 July 2010 (the eve of the European Championship in Barcelona) through to 19 August 2013 (the day after the World Championship in Moscow) and accordingly to have violated Article 32.2(b) of the IAAF Competition Rules (the IAAF Rules) which concerns "Use or Attempted Use by an Athlete of a Prohibited Substance or a Prohibited Method," a CAS statement read.

"As a consequence, a four-year period of ineligibility, beginning on 24 August 2015, has been imposed on Mariya Savinova-Farnosova and all results achieved by her between 26 July 2010 and 19 August 2013, are disqualified and any prizes, medals, prize and appearance money forfeited."

The World Anti-Doping Agency (WADA) had initially called for Savinova to be banned for life after she was named as one of five Russian athletes implicated in the first Independent Commission report.

Savinova was caught admitting to injecting banned substance testosterone and taking oxandrolone in undercover footage filmed by whistleblower Yuliya Stepanova back in 2014.

It prompted WADA to launch an investigation, which culminated in the Russian Athletics Federation being banned from international competition in November 2015.

The 800m specialist also has ties to two coaches suspected of involvement in a state-sponsored doping scheme in the country.

Alexei Melnikov, a long-distance running and race walking coach, was banned for life last year, while Vladimir Kazarin remains suspended pending the results of an investigation.

In the latest documentary from German channel ARD, the first of which sparked the first WADA Independent Commission probe, Russian track and field athlete Andrey Dmitriev alleged Kazarin was still working in the sport despite his suspension.

Dmitriev spoke of secret video footage of suspended coach Kazarin, who is seen in a sports hall in Chelyabinsk during a training session for 400m runner Artem Denmukhametov.

He also reported having seen Kazarin at a training camp in Kyrgyzstan in November of last year.

Kazarin is a former coach of Stepanova, who along with husband Vitaly Stepanov has taken up residence at an unknown location in the United States due to having to flee Russia after they provided evidence of state-sponsored doping in 2014.

They were the key witnesses in the ARD documentary Top-secret Doping: How Russia makes its Winners which alleged widespread corruption and drug-taking in Russian athletics.