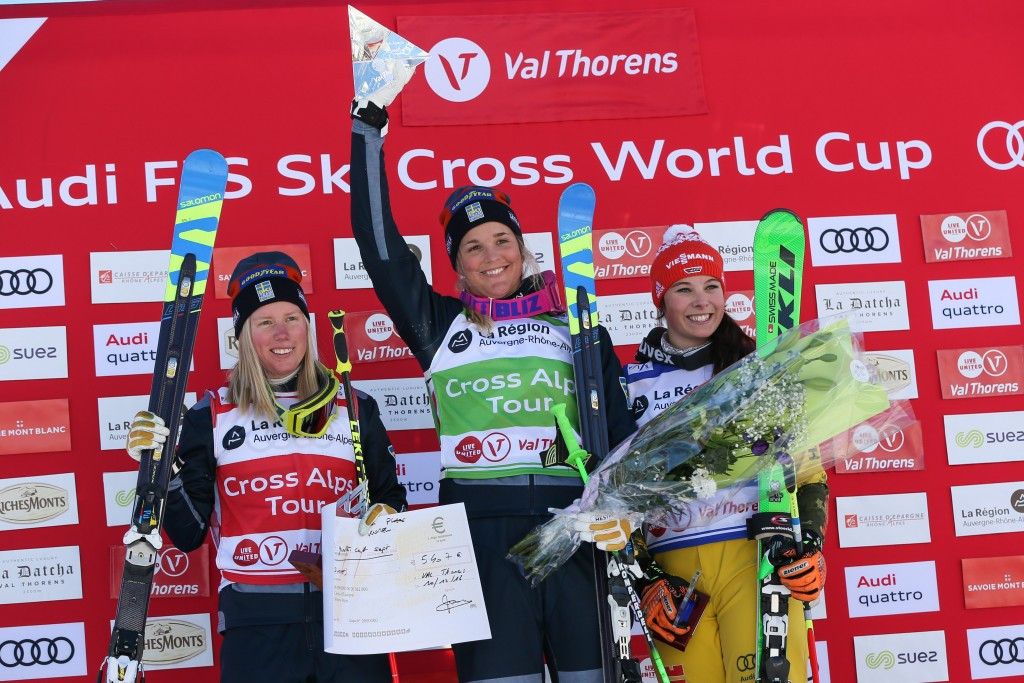 Swedish duo Anna Holmlund and Sandra Naeslund made amends for crashing into each other yesterday by claiming a one-two in Val Thorens at the International Ski Federation Ski Cross World Cup today.

On the opening day of the competition, which is also the curtain raiser for the 2016-2017 season, both made the final in the women’s race, but a collision allowed Olympic champion Marielle Thompson of Canada to win.

However, there were no mistakes 24 hours later in the French resort as Holmlund made it home ahead of Naeslund to claim the gold.

On the men’s side of the competition, Switzerland’s Alex Fiva scored his first win on the circuit since March 2014 after Frenchman Jean Frederic Chapuis, who won yesterday and at the Sochi 2014 Winter Olympics, missed a gate in the quarter-finals.

In the big final, both Swedes surged ahead early on and stayed, making sure not to hit each other this time, despite only being a metre apart at the final corner.

Behind them, Germany’s Daniella Maier recorded her first ever World Cup podium as she finished third in front of Canadian veteran Kesley Serwa.

The win left Holmlund delighted and she admitted the previous day’s crash angered her.

“It’s good to be able to come back today and take the victory,” she said.

It was not such a good day for reigning Olympic gold medallist Thompson as a mistake in the semi-finals saw her lose speed and finish third, meaning she could not add to yesterday victory and having to settle for fifth.

Holmlund’s success also saw her jump to top of the World Cup leaderboard on 150 points, five ahead of Thompson.

Naeslund is a further five points behind in third place.

In the men’s big final, Fiva got off to a strong start and glided ahead of Canada’s Brady Leman, who could not get near the Swiss skier.

“But to get a win in the second race of the season at Val Thorens, where I’ve never been very good, is really special for me.”

Leman was challenged for silver by Sweden’s Viktor Andersson and at one stage was in front, but the Canadian got his man on the final turn to secure second spot.

Fiva’s success also helped him move into first place on the World Cup leaderboard on 140, 11 points ahead of Chapuis.

Sylvain Miaillier of France sits in third place on 100, just two in front of Leman.

The skiers now head to Arosa in Switzerland for a first of its kind night-time sprint event on December 13.