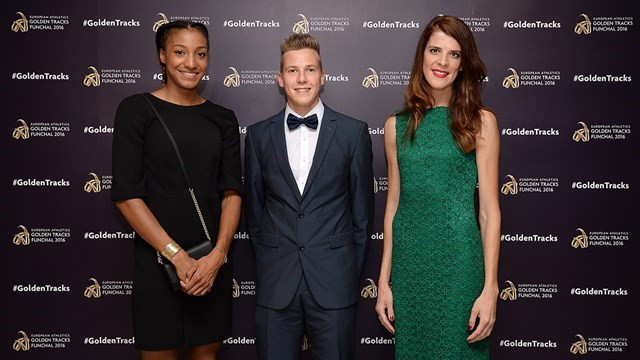 Great Britain’s Mo Farah and Spain’s Ruth Beitia have been crowned the respective men’s and women’s European athletes of the year at the Golden Tracks gala here tonight.

It was an historic night for 33-year-old Farah, who becomes the first athlete to win the men’s award on three occasions having also achieved the feat in 2011 and 2012.

At the Rio 2016 Olympic Games in August, Farah became only the second man in history to retain the 5,000 metres and 10,000m Olympic double, following in the footsteps of legendary Finn Lasse Virén, who did the same double-double in 1972 and 1976.

Farah saw off competition from Italian Gianmarco Tamberi, who won the high jump title at both the World Indoor Championships in Portland and the European Athletics Championships in Amsterdam, and Germany’s Thomas Röhler, who threw 90.30m at Rio 2016 to claim the Olympic javelin title.

Spanish high jumper Beitia, 37, won the women’s award having become the oldest Olympic champion in a jumping event by winning in Rio de Janeiro with a height of 1.97m.

This success was achieved just a few weeks after a leap of 1.98m in Amsterdam brought European Athletics Championships gold for the third time in a row.

Her Rio glory made her the first Spanish woman to win an Olympic athletics event and was justification for her decision to return to the sport four years ago having briefly retired in 2012.

Hess established his position on the senior ranks with silver at the International Association of Athletics Federations (IAAF) World Indoor Championships in Portland in March.

He then took one step up the podium at the European Athletics Championships in Amsterdam, just four days before his 20th birthday.

Hess won with a second round jump of 17.20m, which was his only registered mark in the final - he had two fouls and three passes.

His triumph came in both a personal best and the European leading-mark of 2016.

Awarding him with the trophy was European Athletics vice-president Dobromir Karamarinov.

Thiam, one of the initial 10 nominees for the women’s athlete of the year award, received her trophy from IAAF President Sebastian Coe.

A record 200,000 fans cast their votes on social media to choose the winners of the prestigious titles.

The programme was established to promote the Runbritain handicap scoring system and embellish an individual journey in a mass sport.

Project leaders Geoff Wightman and Gavin Lightwood, both from Britain, received the prize this evening.